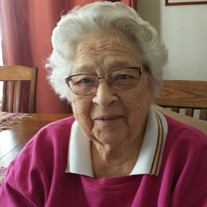 Gwendolyn Imogene Henrichs was born October 29, 1923 to Dick Henrichs, Sr. and Goldie (Dankenbring) Henrichs at the family home south of Auburn,Nebraska. She was the oldest of five children. Gwen graduated from Nemaha High School in 1942. She played clarinet in the school band, and was recognized at the dedication of the Nemaha County Monument to the school and the town as one of the oldest living students who had attended the school. On October 8, 1944 Gwen was united in marriage to Merle Allen at the parsonage of St. Paul Lutheran Church in Auburn. They were blessed with four children: Janice, Sharon, Jack, and Diana. The couple resided on their family farm until retiring and moving to the High Rise in Auburn in 2006. Merle passed in 2008, and for health reasons Gwen went to live with her daughter Sharon in 2016. She remained with her daughter and passed at home and passed away on Friday, September 27, 2019 after becoming a Tabitha Hospice patient. During her active years Gwen enjoyed gardening and being outside. She was a wonderful cook and baker. For many years she and Merle enjoyed playing cards with friends and neighbors. In her later years she enjoyed watching bowling on television. She was an avid Kansas City Royals and Nebraska Cornhusker football and volleyball fan. She also enjoyed the Game Show Network. Gwen was a member of the St. Paul Lutheran Church in Auburn. The loves of her life were her grandkids and great-grandkids. She enjoyed spoiling them at every opportunity and they all love her dearly as do her children. Gwen is survived by her children Janice Moore (Ron) of Kearney, MO, Sharon Hessler (Bill) of Auburn. Jack Allen, Diana Perry (Ron); grandchildren Shannon Moore (Diane), Mindy Grusing (Brent), Matthew Demers (Lizzie), Carissa Curtis (Kurt), Jenny Wallinger, Bryce Perry; great-grandchildren Caleb, Micah & Asher Grusing, Justyn (Kiana) Curtis, Brandon Curtis, Alivia Wallinger, Eastlyn Wallinger, many other relatives and friends. View Gwendolyn's service via Livestream at: https://livestream.com/accounts/13846112/events/8841647 Memorials are suggested to family choice for later designation.

Gwendolyn Imogene Henrichs was born October 29, 1923 to Dick Henrichs, Sr. and Goldie (Dankenbring) Henrichs at the family home south of Auburn,Nebraska. She was the oldest of five children. Gwen graduated from Nemaha High School in 1942.... View Obituary & Service Information

The family of Gwendolyn Allen created this Life Tributes page to make it easy to share your memories.