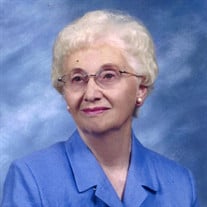 Harriet Louise Moline was born on February 7, 1927 at home in Stromsburg, Nebraska to Carl T. Moline and Pearl H. Phillips. She passed away on Friday, January 29th, 2016 in Auburn, Nebraska. Harriet attended school in Stromsburg and graduated from York High School in 1944. Harriet worked for one year following high school at the Fairmont Army Airfield where pilots for B-24 and B-29’s were in training in WWII. Harriet then went on to graduate in 1949 from the University of Nebraska at Lincoln. Harriet met Donald Kerl, the love of her life, in a freshman college Botany class and they later married on August 7, 1949 in York, Nebraska. Harriet worked as a Home Economics teacher while Don finished college after his return from the service in Korea. Don graduated from UNL in 1951 and then started to work for the Soil Conservation Service in North Dakota. Harriet was a homemaker for the family as they moved to Wayne, David City and Auburn, Nebraska. She went back to school to study Library Science at Wayne State and then became the City librarian. Harriet later worked with the libraries in David City and Auburn. She was a member of several bridge clubs, PEO and the Auburn United Methodist Church. She loved to garden, sew and bake. Survivors include two daughters, Debbie (Clonnie) Fox of Lenexa, KS; Jeanne (Anne) Figert-Kerl of Skokie, Il; and two sons, Steve (Marcia) Kerl of Bartlett, TN; Scott (Sun) Kerl of Rochester, MN: seven grandchildren and six great grandchildren. Harriet was preceded in death by her husband Donald Kerl and parents and two sisters. The family is grateful for wonderful love and care shown by her friends, neighbors and the excellent, caring staff at the Auburn Good Samaritan Society and the Asera Hospice staff. A funeral service will be Saturday, February 6, 10:00 a.m. at the First United Methodist Church in Auburn. Burial will follow in Sheridan West Cemetery. Visitation will be at the funeral home Friday 9:00 a.m. to 8:00 p.m., with family greeting friends 4:00 to 7:00. Memorials are suggested to First United Methodist Church or Auburn Memorial Library.

The family of Harriet L. Kerl created this Life Tributes page to make it easy to share your memories.

Send flowers to the Kerl family.