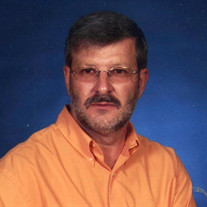 Harry Russell Bowman, one of seven children of Harry Benjamin and LaVerne (Weigle) Bowman, was born March 12, 1952 in Virginia Beach, Virginia. Harry attended schools in Virginia, Alaska, and Verdon, Nebraska before graduating from high school in Auburn, Nebraska in 1972. The day Harry started school in Auburn, he met Dianne McCullough. They hit it off from the start, and were united in marriage on October 14, 1972 in Auburn. They made their home in Auburn, and were blessed with two children, Chad and Kara (who Harry called “Dolly”). Harry worked for a time in the electrical business, and then in the concrete pouring industry. He next began work as a heavy equipment operator for Nemaha County. Harry served as supervisor for the heavy equipment crew, and then decided he enjoyed working on the machines. He retired as a mechanic for the County. He often said he could fix anything but a broken heart, and that was Dianne’s department. As a member of Lord of Hosts Church in Omaha, Harry loved the Lord with all his heart. He was assured of his salvation and comfortable in his relationship with Jesus. With Dianne and sometimes without her, Harry went on mission trips to Guatemala, China, and Mexico. Together, Harry and Dianne launched Transformation Ministries, an outgrowth of their mission trips. Harry’s other interests included telling “corny” jokes, and visiting the mountains of Colorado. With his family, he made many trips to the mountains camping or snow skiing. He loved going down the slopes “Mach 10” with his “hair on fire”. A special part of Harry’s life was his grandkids, who called him “Pa”. He loved being with them and playing with them, and was very proud of all of their talents and skills. In April of 2015, Harry was diagnosed with cancer. With Dianne and the rest of the family by his side, he battled the disease for over two years. It was Saturday, April 15, 2017, at his home in Auburn, that Harry departed Earth into the arms of Jesus. He had reached the age of 65 years, 1 month, and 3 days. His father, infant brother Ray, and parents-in-law Leon and Berniece McCullough preceded him to Heaven. Those left to remember his loving, guiding way include his wife Dianne; son and daughter-in-law Chad and Kathy Bowman of Auburn; daughter Kara “Dolly” Vaughn of Auburn; grandchildren Rachel, Preston, and Ashlynn Vaughn; Jacob and Jessica Bowman; mother LaVerne Bowman of Falls City; sisters Ruth (John) Rogers of Omaha; Judy Jane Becker of Falls City; Margie (Douglas) Sailors of Falls City; brothers Ben (Cherie) Bowman of Topeka, KS; Melvin (Carolyn) Bowman of Lincoln; brother-in-law Dale (Charlotte) McCullough of AL; sister-in-law Doris (Frank) Lowrey of MO; many nieces, nephews, other relatives, and many friends. Viewing of Harry's funeral service available via Livestream at: https://livestream.com/accounts/13846112/events/7285362

The family of Harry R. Bowman created this Life Tributes page to make it easy to share your memories.

Harry Russell Bowman, one of seven children of Harry Benjamin...

Send flowers to the Bowman family.