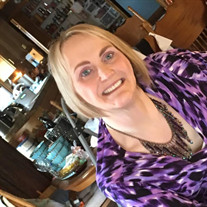 Hayley Marie (Fulton) Burton, 56, passed away on Thursday, November 19, 2020, with her beloved husband at her side, at the Medical Center of the Rockies, Loveland, CO. She was born on January 7, 1964 to Francis W. and Joan G. (Epperson) Fulton in Nebraska City, NE, the youngest of 8 children. Hayley grew up in Brownville, NE, and graduated from Auburn High School in 1982. After graduating she moved to Steamboat Springs, CO to be closer to her dear friends Becca & Pio. In Steamboat Springs, Hayley worked different jobs, later becoming the Office Manager/Lead Phlebotomist in the lab at Yampa Valley Medical Center. That is where she was given the nickname “Radar” by her co-workers for having the answers to all of the questions. Her work ethic, dedication, loyalty, compassion, and assistance to others did not go unnoticed. For over 25 years her co-workers became her friends and she genuinely treated them as her own family. It was at the hospital’s “hoedown” in the spring of 1985 where she met her blind date, David Wayne Burton. Needless to say, Dave became the love of her life and best friend. Dave and Hayley were married May 14, 1988. Hayley thoroughly enjoyed life, her friends, and family. She had an enormous amount of love in her heart, especially for her nieces and nephews. They were very special to her. She showered her friends and family with gifts, many of the gifts that she crafted. Her specialty was her jewelry, glass artwork, and yard ornaments. Hayley radiated sunshine in her smile and laughter, touching the hearts deeply of everyone she met. The past 30 years Hayley suffered from multiple health issues, gradually becoming disabled. As her health declined and became very painful to her, she never complained and continued putting others before her. She was a true selfless inspiration to her family and friends. No amount of her physical suffering could stop her from laughing or having faith in God. She continued to tell others how blessed her life was. She continued to tell others how her husband, Dave, was her “everything”. Hayley is preceded in death by her parents Francis & Joan, parent in-laws Scotty & Helen Burton, infant brother Tommy, brother Bob Fulton, sister Holly Gilliland, sister-in-law Lana Fulton, and brother-in-law Alan Gilliland. Those who remain to remember Hayley’s radiant smile and generous heart include her beloved husband Dave & their faithful dog Ozzy; siblings from Nebraska Bill Fulton; Julie (Rick) Fritz; Gene Fulton; Susan Mann; sister-in-law Lucy Fulton; many nieces & nephews, other relatives, and a multitude of friends. Written with love by her sister, Susan A. Mann. Mass of Christian Burial will be Friday, April 9, 2021 at St. Joseph Catholic Church in Auburn. Rosary will be recited prior to Mass. Burial will follow in Holy Cross Cemetery at Auburn.

Hayley Marie (Fulton) Burton, 56, passed away on Thursday, November 19, 2020, with her beloved husband at her side, at the Medical Center of the Rockies, Loveland, CO. She was born on January 7, 1964 to Francis W. and Joan G. (Epperson)... View Obituary & Service Information

The family of Hayley Marie (Fulton) Burton created this Life Tributes page to make it easy to share your memories.