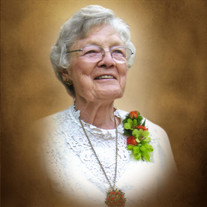 Helen Irene (Pebley) Dahlke, youngest of six children of Alfred “Doc” and Esther (Vollman) Pebley, was born March 12, 1925 in Johnson, Nebraska. Her family moved to Brownville, Nebraska, where she attended school and graduated from high school. Helen was baptized in the Brownville Christian Church in 1935. On December 2, 1944, Helen was united in marriage to Arnold Harms at St. Paul Lutheran (Hickory Grove) Church near Auburn, Nebraska. They made their home in rural Nemaha County, and were blessed with a daughter, Arnelda. Arnold passed away in 1976, and on August 10, 1985, Helen married William Dahlke in Auburn. After graduating from high school, Helen worked for a dentist in Auburn. During her years with Arnold, she worked with him on the farm in addition to running her household and raising Arnelda. After his passing, she worked in retail stores in Auburn, including Hahn Clothing, The Flower Shoppe, and Jones Jewelry. Helen continued to work with the public after her marriage to Bill, helping in his plumbing and heating shop. Helen was confirmed at St. Paul Lutheran (Hickory Grove) Church in 1945, and remained a member there throughout her life. She also belonged to a Garden Club and 4-H Extension Club. She loved cats, and had a real passion for flowers. She was a good baker, and enjoyed going dancing with Bill and playing cards. On October 20, 2016, Helen became a resident of the Good Samaritan Society-Auburn. She made the most of her time there, enjoying the company of others and activities at the center. She passed away at Good Sam on Friday, August 25, 2017, at the age of 92 years, 5 months, and 4 days. In addition to her parents and husband Arnold, Helen was preceded in death by her siblings Clarence Pebley, Ruby VanHorn, Lois Armstrong, Ernest Pebley, and Lucile Mather. Helen is survived by her husband Bill of Auburn; daughter and son-in-law Arnelda and Jim Biaggi of Auburn; grandchildren and their families Brandy and Ed Christen, Connor and Chelsea; Mandy and Sheldon Turley, and Briggs; Benjamin and Casey Biaggi, Jonathan, Kendall, and Jaxson; Scott and Misty Dahlke, Kaitlyn, Logan, and Noah; Leigh Dahlke and Rebecca; her beloved cat Smoky; other relatives and friends. A funeral service was held Tuesday, August 29, 2017, at St. Paul Lutheran (Hickory Grove) Church, officiated by Rev. Paul Lillenas. Deanne Gerking was organist, and Sharon Schuster and Allyn Remmers were soloists. Casket bearers were Ed Christen, Sheldon Turley, Steven Lunzmann, Al Armstrong, Rodney Pebley, and Dave Flies. Burial was in the church cemetery. Memorials are suggested to Hickory Grove Church or AseraCare Hospice.

The family of Helen I. Harms Dahlke created this Life Tributes page to make it easy to share your memories.