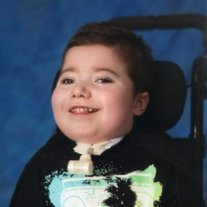 Henry William Cotton, son of Terry Maurice Cotton and Jessica Lee Huffman, was born April 18, 2007 in Omaha, Nebraska. He lived in Peru, Nebraska with his family, and came to love Jim Smith as his dad after Terry’s passing. Henry attended school at the Nebraska Center for the Education of the Blind and Visually Handicapped in Nebraska City. He was known to be a pretty good drummer at school! Always in a good mood, Henry smiled all the time. He loved people with all his heart, whether it was family or friends. He definitely loved to eat, and enjoyed big bowls of cereal before the accident. Henry enjoyed music and singing with his family, and also liked weird noises. A favorite of his was watching UFC with Jim and laughing as they watched. With family surrounding him, Henry passed away at his home in Peru on Friday, October 25, 2013 at the age of 6 years, 6 months, and 7 days. In addition to his father Terry, he was preceded in death by his grandparents Vern and Shirley Cotton. Those left to remember Henry’s smiles are his parents Jessica and Jim Smith of Peru; brothers and sisters Cassius Cotton, Erin Smith, Kyla Smith, Kristin Smith, Kyle Smith, Kody Smith; grandparents Johnnie Huffman of Auburn, Todd Huffman of Nemaha, Jim and Roberta Smith of Brownville; great-grandmother Judie Douglas of Peru; aunts and uncles Candace Cotton, Kelsey Huffman, Dan and Cheryl Cotton, Bruce Cotton, Kelly Kimpston, Shelly and Tim Myers; special friend “Nurse Dana” Hoover; other relatives and many friends.

Henry William Cotton, son of Terry Maurice Cotton and Jessica Lee Huffman, was born April 18, 2007 in Omaha, Nebraska. He lived in Peru, Nebraska with his family, and came to love Jim Smith as his dad after Terry&#8217;s passing. Henry... View Obituary & Service Information

The family of Henry Cotton created this Life Tributes page to make it easy to share your memories.

Send flowers to the Cotton family.