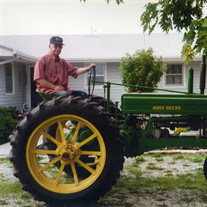 Henry Samuel Haynes, son of Thomas Roy and Carrie L. (Erisman) Haynes, was born June 5, 1920 on a farm northwest of Auburn, Nebraska. He was one of six children. Henry received his elementary education at the Linden School District #21 and attended Brock High School through the 10th grade. In 1944, Henry was called to serve his country in the United States Army. He served in the Southwest Pacific at Saipan and Okinawa. It was there that he was wounded on May 13, 1945. After his recovery, Henry served the remainder of his military life in the Military Police in Honolulu, Hawaii. He was honorably discharged on June 18, 1946. Some of the medals he received were: Purple Heart, Bronze Star, Combat Infantry Medal, Presidential Unit Citation and others. Henry returned home to continue farming until his retirement. On June 10, 1953, Henry was united in marriage to Mary Lou Rears at the Rev. H.D. Keefer home in Auburn. To this union three children were born. With Mary Lou’s help, Henry raised and sold purebred Yorkshire hogs for a number of years, and also had a herd of Charolais cattle. Henry, Mary Lou, and children were chosen to be WOW Farm Family in 1965. Henry was a member of the Brock Christian Church where he served as an elder and a trustee. He was a life member of 96th Infantry Division (Dead-Eyes), Military Order of the Purple Heart, Veterans of Foreign Wars, Disabled American Veterans, and a continuous member of the American Legion for over 60 years. He was a member of the Legion rifle squad for 16 years, served for 8 years as Veterans Service Officer, and volunteered at the Lincoln VA Hospital for 27 years. Henry also was a 4-H Leader and a member of the Farmers’ Co-op Board. Henry died May 25, 2014 at Tabitha Nursing Center in Lincoln, Nebraska, having reached the age of 93 years, 11 months, and 10 days. He was preceded in death by his parents, son Daryl, one brother, four sisters, and three sisters-in-law. Henry is survived by his wife Mary Lou of Auburn; daughters and sons-in-law Denise and Gary Irwin of Lincoln; Shela and Tom Moss of Creston, IA; granddaughters Rachelle and husband Orlando Matos of Kansas City, KS; Danelle Ohnmacht of Lincoln; sister-in-law Jeane Kulhlmann of Humboldt; brother-in-law Don and wife Rose Marie Rears of Stella; nieces, nephews, other relatives and many friends. A funeral service will be Wednesday, May 28. 2:00 p.m. at Hemmingsen Funeral Home in Auburn. Burial will follow in Sheridan Cemetery near Auburn. Visitation will be at the funeral home Tuesday 9:00 a.m. to 8:00 p.m., with family greeting friends 6:00 to 8:00. Memorials are suggested to family choice, which will be directed to veteran’s organizations.

Henry Samuel Haynes, son of Thomas Roy and Carrie L. (Erisman) Haynes, was born June 5, 1920 on a farm northwest of Auburn, Nebraska. He was one of six children. Henry received his elementary education at the Linden School District #21... View Obituary & Service Information

The family of Henry S. Haynes created this Life Tributes page to make it easy to share your memories.

Send flowers to the Haynes family.