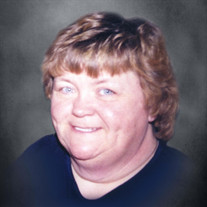 Hollyce Joan (Fulton) Gilliland, one of eight children of Francis and Joan (Epperson) Fulton, was born June 21, 1952 in Council Bluffs, Iowa. Holly and her family lived in Murdock and Greenwood in Nebraska, and Corning, Missouri, before moving to Brownville, Nebraska, when she was 7. She attended Happy Hollow School through 8th grade, Peru Prep her 9th grade year, and then Auburn High School, graduating in 1970. Holly’s first job was with the Brownville Historical Society. She worked for a while at the Brownville House, and then opened Holly’s Hobby Café in Brownville from 1975 to 1979. She worked at numerous Auburn restaurants before opening the second Holly’s Hobby in Auburn, which she ran from 1998 to 2004. Holly then worked at Family Connections from 2006 until retiring in 2014. In 1985, Holly married Alan L. Gilliland in Auburn. They were blessed with two children, Sadie and Bill. The couple divorced in 1996 but remained very dear friends. Holly was a member of St. Joseph Catholic Church in Auburn. She enjoyed gardening, raising flowers, and crafting in her spare time. Her family, and her pets, were very important to Holly, and the lifelong friends she made from her various workplaces were like family to her. Toward the end of 2017, and into 2018, Holly suffered from numerous health issues. On January 13, 2018, she entered Lancaster Rehabilitation Center in Lincoln, Nebraska. During her time at Lancaster, she had stays in St. Elizabeth Health Center and the Nebraska Heart Hospital in Lincoln. Her final return to Lancaster Rehab was March 22, and it was there she passed away on Wednesday, March 28, 2018, at the age of 65 years, 9 months, and 7 days. She was preceded in death by her parents, infant brother Thomas Alan, and former husband Alan. Holly will be forever cherished by her daughter Sadie Gilliland of Auburn; son Bill Gilliland of Auburn; siblings and their spouses Bob (Lucy) Fulton of Auburn, Bill (Lana) Fulton of Auburn, Julie (Rick) Fritz of Dawson, Gene Fulton of Nebraska City, Susan Mann of Auburn, Hayley (Dave) Burton of Steamboat Springs, CO; former sister-in-law Norma (Duane) Horner of Nebraska City; many nieces, nephews, extended family and many friends. A funeral service will be Wednesday, April 4, 2:00 p.m., at Hemmingsen Funeral Home in Auburn. Visitation will be at the funeral home on Tuesday from 9:00 a.m. to 8:00 p.m., family will greet friends from 5:00 to 7:00, with Rosary being recited at 7:00 p.m. Burial of ashes will take place at a later date in Walnut Grove Cemetery at Brownville. Memorials suggested to family choice. View Holly's funeral via Livestream at: https://livestream.com/accounts/13846112/events/8142318

Hollyce Joan (Fulton) Gilliland, one of eight children of Francis and Joan (Epperson) Fulton, was born June 21, 1952 in Council Bluffs, Iowa. Holly and her family lived in Murdock and Greenwood in Nebraska, and Corning, Missouri, before... View Obituary & Service Information

The family of Holly J. Gilliland created this Life Tributes page to make it easy to share your memories.

Hollyce Joan (Fulton) Gilliland, one of eight children of Francis...

Send flowers to the Gilliland family.