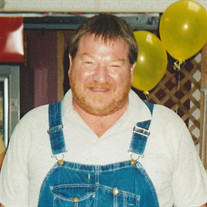 Jack Gene Whisler, one of eleven children of John Dempsey, Sr. and Arlene Agnes (Lindsay) Whisler, was born January 25, 1962, at Auburn, Nebraska. Jack Gene grew up and attended school in Peru through elementary, he then attended school at Auburn, graduating from Auburn High School with the class of 1980. Jack Gene was baptized and confirmed at the Methodist Church in Peru. In the summer of 1982, Jack Gene was united in marriage to Brenda Croghan and they would be blessed with two children: Ashley May and Benjamin Gene. The couple would later divorce. Jack Gene began working at Trade Well Pallet, Inc. in Peru and continued working for the company when they moved their operation to Ashland. While working in Ashland, Jack Gene stayed at Memphis Lake during the week, but still spent his weekends back home in Peru. Jack Gene loved the river. He loved fishing, camping and having bon fires, grilling out, and skeet shooting out at the river. Jack Gene also loved being in the driver’s seat, anytime they were going anywhere, Jack Gene always wanted to drive. His love of driving came at an early age, he began cruising main street in Peru once he was old enough to see over the steering wheel and continued cruising Peru all his life. On Wednesday, September 8, 2021, Jack Gene unexpectedly passed away at his home in Peru, having reached the age of 59 years, 8 months, and 14 days. He was preceded in death by his parents, infant son, and brother John Dempsey, Jr. Those left to remember Jack Gene fondly include his daughter Ashley May Schramm of Falls City; son and daughter-in-law Benjamin Gene and Kelly Whisler of Falls City; grandchildren Cameron and Daphne Schramm; sisters and brother-in-law Jackie Kuskie of Central City, Judi Shannon of Elma, WA, Juanita Whisler of Tacoma, WA, Julia and Randy Perry of Peru; brothers and sisters-in-law Joe and Gloria Whisler of Deepwater, MO, Jeff Whisler of Bay City, TX, Jay and Susan Whisler of Hershey, Josh and Jackie Whisler of Peru, Jerry and Suzanne Whisler of Auburn; other relatives and friends. A memorial service will be held Friday, September 17, 2021, 6:00 p.m. at Hemmingsen Funeral Home in Auburn. View Jack Gene's service via Livestream at: https://livestream.com/accounts/13846112/events/9848561 Memorials suggested to family choice.

The family of Jack Gene Whisler created this Life Tributes page to make it easy to share your memories.

Send flowers to the Whisler family.