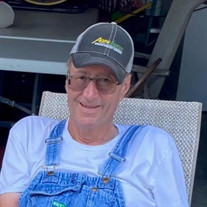 James Harvey Findlay, one of two sons born to Robert and Mildred (Eichstaedt) Findlay, was born February 17, 1949 in Auburn, Nebraska. Jim grew up on a farm north of Stella and attended Stella Schools. He graduated with the first class of Southeast Nebraska Consolidated Schools in 1967. He attended Peru State College for three years. On February 21, 1970 Jim married Marilyn Shanks at St. Paul Lutheran Church in Auburn, Nebraska. They had four children: Julie, Jeff, Jenny and Janelle. Jim enjoyed life. He was a life-long farmer and loved the land. His cattle and spending time with his friends also brought him lots of happiness. His family though was most important to him. He enjoyed watching them play sports and teaching and preaching them life-long lessons His grandchildren brought him a lot of joy and most times they would be doing things on the farm or sitting at the table playing five-point pitch. July 4th was his favorite holiday and putting on a fireworks show was a highlight for him. In October, Jim was diagnosed with cancer and entered the hospital. On December 10th he was able to come home and Marilyn and his family took care of him. On January 23, 2022 he passed away at home. He was preceded in death by his parents, grandchildren Millie and Jed Findlay, brother Bill Findlay, and sister-in-law Robin Shanks. Jim is survived by wife Marilyn; children and spouses Julie and Jason Lambert of Nemaha, Jeff and Susan Findlay of Falls City, Jenny and Todd Black of Waverly, Janelle and Travis Knippelmeyer of Johnson; grandchildren John (Julia), Josh, and Jocelyn Lambert, Elle, Jack, and Hayden Findlay, Taylor and Garrett Black, Natalie and Kasie Knippelmeyer; brothers-in-law Bill (Bonnie) Shanks of Stella, Raymond Shanks of Syracuse; other relatives and friends. Visitation will be at the funeral home Thursday, January 27, 9:00 a.m. to 6:00 p.m. Private family committal service and burial will be at the Stella Cemetery. Memorials are suggested to the Stella Cemetery.

James Harvey Findlay, one of two sons born to Robert and Mildred (Eichstaedt) Findlay, was born February 17, 1949 in Auburn, Nebraska. Jim grew up on a farm north of Stella and attended Stella Schools. He graduated with the first class of... View Obituary & Service Information

The family of James Harvey Findlay created this Life Tributes page to make it easy to share your memories.

James Harvey Findlay, one of two sons born to Robert and Mildred...

Send flowers to the Findlay family.