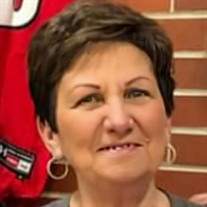 Janet Pauline (Yelkin) Knippelmier, one of three children of John and Irene (Kehr) Yelkin, was born May 8, 1943, in Auburn, Nebraska. She grew up and attended school in Auburn, graduating from Auburn High School in 1961. On September 16, 1961, Janet was united in marriage to Stanley Knippelmier at St. Paul Lutheran Church in Auburn. This union would be blessed with four children: Kelly, Kurt, Kraig, and Kerri. Janet had an entrepreneurial spirit, and she and Stan owned and operated businesses in Auburn and Johnson. They first owned Stan’s Apco Station in Auburn and then the Dairy Sweet. They next were owner/operators of The White Horse in Johnson. Janet had also served as a secretary in the law office of Dale Cullen and at Union Bank and worked at Lou’s Style Shop, all in Auburn. Most recently she worked at Cooper Nuclear Station in Brownville, a position she held for over 20 years, retiring in July of 2021. Janet was a lifetime member of St. Paul Lutheran Church in Auburn. Her free time was spent attending the many activities of her grandchildren and spoiling them rotten. On December 6, 2021, Janet had a stroke at her home in Johnson and was life-flighted to UNMC in Omaha, Nebraska, and she spent time at Madonna Rehabilitation, also in Omaha. On January 17, 2022, Janet entered the Good Samaritan Society-Auburn. She passed away there on Tuesday, January 25, 2022, at the age of 78 years, 8 months, and 17 days. Her parents John and Irene, husband Stan, and brother and sister-in-law Rich and Marlene Yelkin preceded her in death. Janet is remembered lovingly by her children and their spouses Kelly (Doug) Stahl of Johnson, Kurt Knippelmier of Auburn, Kraig Knippelmier of Johnson, Kerri (Paul) Moerer of Johnson; grandchildren Tawna (Ryan) Bennett of Nebraska City, Kyle (Heidi) Knippelmier of Beatrice, Kristin (Wade) Caspers of Tecumseh, Seth Moerer and Shae Moerer both of Johnson; great-grandchildren Kade, Bo, Crew, Urban Knippelmier, Elleigh, Dierks, Emmitt Caspers, Bodhi Bennett +1 on the way; brother Bob (Vivian) Yelkin of Lake of the Ozarks, MO; sister-in-law Pat Smith of Lincoln; nieces, nephews, other relatives and friends. A funeral service will be Saturday, January 29, 10:30 a.m. at St. Paul Lutheran Church in Auburn. Burial will follow in Sheridan Cemetery at Auburn. Visitation will be at the funeral home Friday, 9:00 a.m. to 8:00 p.m., with family greeting friends 6:00 to 8:00.

Janet Pauline (Yelkin) Knippelmier, one of three children of John and Irene (Kehr) Yelkin, was born May 8, 1943, in Auburn, Nebraska. She grew up and attended school in Auburn, graduating from Auburn High School in 1961. On September... View Obituary & Service Information

The family of Janet Knippelmier created this Life Tributes page to make it easy to share your memories.

Janet Pauline (Yelkin) Knippelmier, one of three children of...

Send flowers to the Knippelmier family.