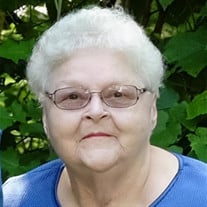 Janice Lee (Owens) McCormick was born March 30, 1933 on a farm west of Coryell Park near Brock, Nemaha County, Nebraska. She was the fourth of five children born to Austin and Ella (Gawer) Owens. The family moved to Wahoo, Nebraska, in 1943, where Jan graduated from High School in 1950. Following graduation, she worked at various places around Wahoo and then began work for the Lincoln Telephone and Telegraph Company as a bookkeeper. She met her future husband, Kenneth A. McCormick, in Wahoo when he worked for the Wahoo Newspapers. Jan and Ken were married on August 21, 1955 by the Rev. Frank Bartleson at the First Methodist Church in Stanton, Nebraska, where Ken was the publisher of the Stanton Register. To this union three children were born, Sam Allen, Douglas Lee (stillborn), and Kay Lynn. In Stanton Jan worked as a linotype operator and secretary for the Stanton Register. In October 1959 the family moved to Auburn, Nebraska, when Ken accepted the position of advertising manager for the Auburn Newspapers. After a brief stint as a linotype operator, Jan began a 22-year career at magnolia Metal Company. At Magnolia she was a bookkeeper and in charge of exports. When Magnolia moved their office to Omaha, Jan took on temporary positions at Cablevision, the Dwight Griffith Law Office, and Johnson Motors. In 1986 Jan and Ken bought Hummel’s Variety Store, which they owned and operated until they retired from retail trade in 1995. Jan was a member of the Auburn Junior Woman’s Club, president of the Mrs. Jaycees, and active in the First United Methodist Church of Auburn. She was a longtime member of the Eleven and One Bridge Club. She also enjoyed playing in duplicate bridge clubs and bridge tournaments. In retirement she enjoyed holidays with her children and their families and the activities and events of her grandchildren and great-grandchildren. She was an avid fan of Husker football, volleyball, basketball, and baseball, and of the Kansas City Royals. Jan passed away on April 26, 2019 under hospice care in Olathe, Kansas, where she had been transported to be near her children following complications due to congestive heart failure, having reached the age of 86 years and 27 days. She was preceded in death by Ken, her husband of 63 years, by her son Douglas, grandson Aaron Matthew McCormick, and her brothers and sisters. Jan leaves to mourn her son and daughter-in-law, Sam and Jo McCormick of Lenexa, Kansas; daughter and son-in-law, Kay and Rich Gerdes of Wellsville, Kansas; grandchildren and spouses, Kirk and Kristin Gerdes, Joel and Nicole Gerdes, Nathan and Janine McCormick, Neil McCormick and Erin Korris, and Caitlin and Bret Imgrund; great-grandchildren Owen, Dane, and Anna Gerdes, Gavin Gerdes, and Tanner and Cameron McCormick; good friend Annie Wakefield, nieces, nephews, and other friends and relatives. A memorial service will be held Saturday, May 4, 2019, 11:00 a.m. at First United Methodist Church in Auburn. Visitation will be at Hemmingsen Funeral Home on Friday, from noon to 8:00 p.m. with family greeting friends 6:00 to 8:00. Burial of ashes will take place in Clifton Cemetery, near Brock, Nebraska. Memorials are suggested to First United Methodist Church of Auburn or Auburn Rescue Squad.

Janice Lee (Owens) McCormick was born March 30, 1933 on a farm west of Coryell Park near Brock, Nemaha County, Nebraska. She was the fourth of five children born to Austin and Ella (Gawer) Owens. The family moved to Wahoo, Nebraska, in 1943,... View Obituary & Service Information

The family of Janice McCormick created this Life Tributes page to make it easy to share your memories.

Send flowers to the McCormick family.