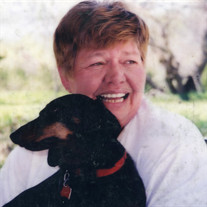 Jean “Jeanie” Marie Dunekacke Tisdale died early in the morning on Tuesday, February 19, 2019 at age 78. She is remembered by her husband Charlie Tisdale and her dachshund Hans, as well as her stepson Paul, his wife Carla, and their daughter Jocelyn. She is also remembered by her siblings and their families: Dave and Carol Dunekacke, Paul and Karen Dunekacke, Lee and Mary Lou Dunekacke, and Mary Ann and Dennis Johnson. She left behind nine nieces and nephews: Amy Oestmann (Darren), Anne Parde (Tanner), Jeff Dunekacke (Cindy), Mike Dunekacke, Julee Jaeger (Tyrone), Jennifer Dunekacke (Alex), Tom Dunekacke (Jari), Trent Johnson (Karen), and K.C. Johnson (Mariah), as well as 17 great nieces and nephews (and one on the way). Jean was preceded in death by infant brother Kenneth, parents Julia and Fred Dunekacke, parents-in-law Jane and Herschel Tisdale, stepson Lee Tisdale, and best friend Larry Nedrow. Jean was born on February 17, 1941 in Auburn, Nebraska. She attended Roosevelt Country School near her family’s farm, where she grew up, outside of Johnson. She graduated from Johnson High School in 1958 and moved to Lincoln where she completed her coursework at the Lincoln School of Commerce. She delighted in her career as a medical secretary at Nebraska Orthopedic Hospital for 35 years. As a bartender at Barry’s Tavern, she grew close with the Barry family and touched hundreds of lives with her gregarious personality and affinity for befriending strangers. In her later years, Jeanie worked at City Spirits Liquor Store in South Lincoln, where she is fondly remembered by the Langford family. She met Charlie Tisdale on September 24, 1981. When, according to her stipulations, he had successfully pronounced and spelled her last name, she agreed to a date. By the following January, they were going steady, and five years later, on January 18, 1986, they were married in the front room of her home on A Street. Jean was a lifelong Lutheran and a confirmed member of St. Matthew Lutheran Church in Johnson, Nebraska. Nearly as important to her as her own relation was her church family. She looked forward to worship each Sunday––where her favorite part was the fellowship that followed. Dozens of Jean’s relatives and friends have one of the “Jean Blankets” that she crafted out of worn out blue jeans. She also enjoyed cooking and gardening, and was known to get competitive about “getting the cannas in” before anyone else in the family. She relished in weekend trips to the casino with Charlie and their friends. She was passionate about crafting, auctions, and antiques, but her favorite pastime was sharing her hobbies and talents with those she loved. Although she loved scouring Facebook for photos of her great nieces and nephews, the telephone was her technology of choice. Long phone conversations with her friends and relatives became increasingly important to her. She will be remembered for her colorful sense of humor, spirited personality, unfailing generosity, and for being everybody’s “Aunt Jean.” The family would like to express its sincere gratitude toward her hospice agency, Pathways to Compassion, as well as The Monarch hospice home, where she was able to spend time during her last days with Charlie, Hans, and a large circle of family and friends. Visitation will take place at Hemmingsen Funeral Home in Auburn on Sunday from 12-6 p.m., with family greeting friends from 3-5 p.m. A celebration of Jean’s life will take place at St. Matthew Lutheran Church in Johnson on Monday, February 25, at 10:30 a.m. Burial will follow at St. Matthew Lutheran Cemetery. Guests are invited to join the family for a luncheon at the Johnson Community Legion building following interment.

Jean &#8220;Jeanie&#8221; Marie Dunekacke Tisdale died early in the morning on Tuesday, February 19, 2019 at age 78. She is remembered by her husband Charlie Tisdale and her dachshund Hans, as well as her stepson Paul, his wife Carla, and... View Obituary & Service Information

The family of Jean Marie Dunekacke Tisdale created this Life Tributes page to make it easy to share your memories.