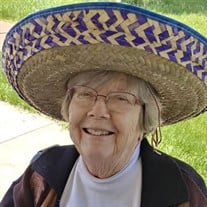 Jean Eloise (Woods) Pappas, daughter of Cecil and Irene (Copes) Woods, was born October 4, 1928 in Lincoln, Nebraska. After the death of her mother, Jean was raised in Page, Nebraska by her grandparents. She graduated from Page High School in 1945. After graduating on a Friday, Jean began working in Lincoln the following Monday as a legal secretary for James E. Ryan. She continued to work there for 37 years, retiring in 1990. On November 26, 1952 Jean was united in marriage to Harry Pappas at First Presbyterian Church in Lincoln. They made their home in Lincoln and were blessed with a daughter, Renee’. Jean and Harry moved to Auburn, Nebraska after both had retired in 1991. Jean was a member of Trinity Lutheran Church in Auburn. She also held membership in the Professional Secretaries International, Lincoln Chapter, American Legion Auxiliary, and Beta Sigma Phi, and was an Auburn Chamber of Commerce Ambassador. She was a very social person who loved to “eat out” and go shopping. Jean also enjoyed playing the piano, fishing, and bowling. At the top of her list of favorite activities, however, was enjoying time with her grandkids and great-grandkids. After Harry’s passing in 2011, Jean lived in their home in Auburn until moving to Long’s Creek Assisted Living in Auburn. She became a resident of Good Samaritan Society-Auburn in May of 2015. While staying at both places Jean enjoyed the camaraderie with other residents and many staff. With family around her, Jean passed away at Good Sam on Wednesday, February 27, 2019 at the age of 90 years, 4 months, and 23 days. She was preceded in death by her husband Harry, her parents, and a brother Dick. Those left to celebrate Jean’s life include her daughter and son-in-law Dr. Renee’ and Terry Vice of Brownville; grandchildren Jeff and Heather Rowell of Auburn, Kelsey and Cody Bradley of Auburn; great-grandchildren Wyatt, Owen, Logan, Taelyn, Brecken, and Ashtyn; brother Dayle and wife Clara Woods of Lincoln; special nieces Sue Woods and Chris Kurtzer; cousin Nancy and husband Mike Shrope; other relatives and friends. Memorials are suggested to family choice. View Jean's service via Livestream: https://livestream.com/accounts/13846112/events/8588918

Jean Eloise (Woods) Pappas, daughter of Cecil and Irene (Copes) Woods, was born October 4, 1928 in Lincoln, Nebraska. After the death of her mother, Jean was raised in Page, Nebraska by her grandparents. She graduated from Page High School... View Obituary & Service Information

The family of Jean E. Pappas created this Life Tributes page to make it easy to share your memories.

Send flowers to the Pappas family.