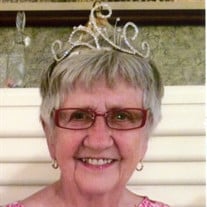 Jeannine Emily (Burt) Crotty, one of two daughters of John Wesley and Marian Lucille (Witwer) Burt, was born May 12, 1930 in Norfolk Nebraska. She attended Norfolk Public Schools and graduated from high school there. She then attended Norfolk Junior College for a year and a half. On February 14, 1950 Jeannine was united in marriage to Patrick H. Crotty in Norfolk. They lived in Oklahoma and Chicago while Pat finished his schooling, and then in Plainview, Nebraska for two years. The couple then made their home in Auburn, Nebraska and raised their family of five: Kathleen, John, Douglas, Kent, and Paul. Jeannine loved being a housewife and mother. Her family was always first in her life. She was also very active in her church and community. A 70+ year member of the United Methodist Church, she served on most committees within the church and was instrumental in many activities. Jeannine sang in the choir for many years, led Bible studies, was a Charter member of the Prayer and Share Group, and started the Prayer Vigil and Pastor Appreciation Day in the Auburn church. Within her community Jeannine was a member of PEO Chapter DB, revived the Red Cross Bloodmobile in Auburn, and served on the Election Board. A project that was dear to her heart was trying to obtain a Performing Arts Center for the school. Jeannine contributed many hours and dollars to the drive still in progress. Other interests in Jeannine’s life included music, Husker football, Royals baseball, camping, and traveling with Pat, their family, and friends. After Pat’s passing in 2008 Jeannine remained in their longtime Auburn home for several years before moving to an apartment in town. She overcame several health issues in her later years, always with a positive outlook and a smile. In her home on Friday, May 10, 2019, with family around her, she went to join Pat in heaven. Along with her husband, she joined her parents, brother-in-law Lee Yoakum, and grandson-in-law Michael Ty. Among those who will forever remember Jeannine’s ever-present smile are her daughter and son-in-law Kathleen and Dan Sullivan of Papillion; sons and daughters-in-law John and Debi Crotty of Auburn; Douglas and Laurie Crotty of Corvallis, OR; Kent and Tanya Crotty of Auburn; Paul and Paula Crotty of Sarasota, FL; 16 grandchildren; 27 great-grandchildren (and one on the way); sister Jeannette Yoakum of Independence, KS; sister-in-law Mary Crotty of Tulsa, OK; brother-in-law Duane Crotty of Muskogee, OK; other relatives and many friends. A funeral service was held Tuesday, May 14, 2019, at First United Methodist Church in Auburn, officiated by Revs. Larry Tolen and Karl Millis. Nancy Ramsey played accompaniment for congregational hymns and Marty Fattig sang a solo. Serving as casket bearers were Patrick Sullivan, Ryan Crotty, Erin Crotty, Nate Crotty, Matt Crotty, and Kaia Sullivan; honorary bearers were Brian Sullivan, Tim Sullivan, Robin Blesius, Rick Crotty, Rusty Crotty, Brenna Crotty, Michael Crotty, Brett Crotty, Tess Crotty, Andrew Crotty, and Sarah Lindquist. Burial followed in Holy Cross Cemetery at Auburn.

Jeannine Emily (Burt) Crotty, one of two daughters of John Wesley and Marian Lucille (Witwer) Burt, was born May 12, 1930 in Norfolk Nebraska. She attended Norfolk Public Schools and graduated from high school there. She then attended Norfolk... View Obituary & Service Information

The family of Jeannine E. Crotty created this Life Tributes page to make it easy to share your memories.

Send flowers to the Crotty family.