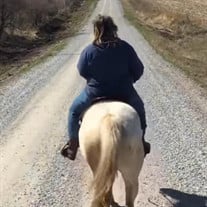 Jennifer Rae (Nostrant) Reeves was born September 26, 1972, in Trenton, Missouri. As her family moved around the country, she attended elementary schools in Missouri and California. When they moved to Peru, Nebraska Jennifer attended school and graduated from high school in Auburn, Nebraska. On February 14, 2001, Jennifer was united in marriage to Darrin Reeves at the Peru Community Church in Peru. They were blessed with one daughter, Ashley. Jennifer’s early focus in life was raising her daughter and running the household. Later, she was great at spoiling her grandkids. She had also worked at various jobs, including the family mowing business. She loved animals and their home in the country was also home to many species, including the horse she enjoyed riding. Jennifer was multi-talented and believed in fixing and building things herself. After becoming ill and entering the Nemaha County Hospital in Auburn, Jennifer was transferred to Bryan Medical Center West in Lincoln, Nebraska. A difficult week of ups and downs in her health status ended with her passing on Sunday, December 26, 2021, at the age of 49 years and 3 months. Jennifer was preceded in death by her parents Bert and Betty (Rohr) Nostrant and parents-in-law Ronald and Shirley Reeves. Jennifer’s passing is mourned by her husband Darrin of Auburn; daughter Ashley Reeves and girlfriend Kaylee Samson of Nebraska City; grandchildren Natalee, Madelynn, Karter, Leyton; brother Cary Nostrant of Shanghai, China; several -in-laws; best friend Alissa Reeves of Peru; beloved dog Jasper; other relatives and friends. A funeral service will be Friday, December 31, 10:00 a.m. at Hemmingsen Funeral Home in Auburn. Burial will follow in Mt. Vernon Cemetery at Peru. Visitation will be on Thursday at the funeral home from 9:00 a.m. to 8:00 p.m. with family greeting friends from 6:00 to 8:00. Memorials are suggested to Nebraska Humane Society or Children’s Hospital Foundation.

Jennifer Rae (Nostrant) Reeves was born September 26, 1972, in Trenton, Missouri. As her family moved around the country, she attended elementary schools in Missouri and California. When they moved to Peru, Nebraska Jennifer attended school... View Obituary & Service Information

The family of Jennifer Reeves created this Life Tributes page to make it easy to share your memories.

Send flowers to the Reeves family.