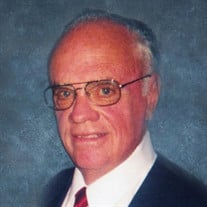 Gerald George (Jerry) Anville, son of Homer and Velma (Foglesong) Anville, was born in Nebraska City, Nebraska on March 13, 1937. He was the oldest of four children. Jerry spent his youth on the family farm east of Julian. Jerry attended rural school near the farm and graduated from Nebraska City High School. Jerry was baptized and a member of the First United Methodist Church in Julian. After high school, Jerry worked at the Ford dealership in Nebraska City. On May 29, 1960, Jerry was united in marriage to Peggy Kirkendall at the First United Methodist Church in Auburn. After their marriage, Jerry and Peggy made their home in Auburn. They were blessed with two children, Tony and Kim. In 1956, Jerry began working at Allied Chemical just south of Omaha near LaPlatte. Jerry would remain there for the next 44 years. He saw the company change ownership to Arcadian and then Potash. Jerry was a dedicated employee who rarely missed a working day during his career. Jerry was known for his willingness to help anyone in need. As he commuted daily between Auburn and LaPlatte, he would stop and help stranded motorist and pick up anyone hitchhiking. After retirement, Jerry enjoyed helping Peggy with her daycare business, helping family and friends work on their cars, and picking up and delivering cars from the auto auction. In his teenage years, Jerry developed an interest in auto racing. This interest would remain for the rest of his life. He introduced many family and friends to racing. He spent summers attending many area dirt track and NASCAR races. He was known as a very proficient card player and also liked watching football. Jerry enjoyed walking during his retirement years and visiting with the people of Auburn on these walks. In recent years, Jerry had been in failing health and entered the Good Samaritan Society of Auburn in March of 2019. This is where he passed on November 17th, 2020 at the age of 83 years, 8 months, and 4 days. He was preceded in death by his parents Homer and Velma, parents-in-law Earl and Hazel Tucker and Charles Kirkendall, his sister Karen Abrassart, brother and sister-in-law Charlie and Marilyn Kirkendall, sister-in-law Erma Dean Kirkendall and brother-in-law Dallas Jaros. Those who remain to remember Jerry’s life, are his wife of 60 years Peggy, son Tony, daughter Kim and husband Paul Fleming all of Auburn. Grandchildren Jason (Alissa) Fleming, Kure Beach NC, James Fleming, Crystal River FL and Neil (Carly) Fleming, Gainesville FL, and 5 great-grandchildren. Sister Judy (Jerry) Herzog of Nebraska City, brother Gordon Anville of Omaha, brother-in-law Wes Abrassart of Kankakee, IL, sister-in-law Joan Jaros of Auburn, brothers-in-law Ted (Merry) Kirkendall of Rapid City, SD, Jerry (Shirley) Kirkendall of Grand Island, Larry (Joyce) Kirkendall of Lincoln, nephews, nieces, many cousins and friends. A celebration of Jerry’s life will be Sunday, November 22, 2020, 2:00 p.m. at Sheridan West Cemetery near Auburn. Visitation will be both Friday and Saturday from 9:00 a.m. to 5:00 p.m. at Hemmingsen Funeral Home in Auburn. Memorials suggested to family choice.

Gerald George (Jerry) Anville, son of Homer and Velma (Foglesong) Anville, was born in Nebraska City, Nebraska on March 13, 1937. He was the oldest of four children. Jerry spent his youth on the family farm east of Julian. Jerry attended... View Obituary & Service Information

The family of Jerry Anville created this Life Tributes page to make it easy to share your memories.

Send flowers to the Anville family.