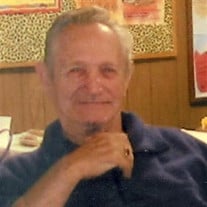 Jerry Delmar Mertes, one of five children of Edmond Peter and Lola Marie (Hays) Mertes, was born December 3, 1936 in Peru, Nebraska. He attended school in Peru, where he graduated from high school. Jerry enlisted in the U.S. Air Force in September of 1954. He served at various bases around the country until his honorable discharge in June of 1958. In 1959 Jerry married Barbara Jean Eitzmann in Washington State. They were blessed with three children: Todd, Carla, and Leslie. Jerry and Barbara would later divorce. Jerry worked for many years at Triangle Pacific Cabinets in Auburn, Nebraska. He then started working in construction and power maintenance at outages in nuclear power plants around the country. A big Husker fan, Jerry loved going to games when he could. He had been a member of the Auburn Country Club, Eagles, and Elks through his life. He enjoyed hunting and fishing, casinos, stock cars, and travelling with his brother-in-law Fred Hardy in Fred’s truck. Above all, Jerry loved following his grandkids in their sporting events. Jerry spent the last 4 ½ years of his life in nursing homes. He was always being ornery, teasing the staff, and never giving up on life. Jerry was most recently at Golden Living Center in Nebraska City, and it was there that he passed away on Sunday, March 13, 2016, having reached the age of 79 years, 3 months, and 10 days. He was preceded in death by his parents; aunt and uncle Art and Vera Hays; brother Ron; and sister Joan “Polly” Hardy. A funeral service will be Thursday, March 17, 10:30 a.m. at Hemmingsen Funeral Home of Auburn. Burial will follow in Mt. Vernon Cemetery at Peru, with graveside military honors provided by VFW Post #7299 of Peru. Visitation will be at the funeral home Wednesday 9:00 a.m. to 8:00 p.m., with family greeting friends 6:00 to 7:00. Online viewing of Jerry's funeral service is available via Livestream at: https://livestream.com/accounts/13846112/events/5007776

Jerry Delmar Mertes, one of five children of Edmond Peter and Lola Marie (Hays) Mertes, was born December 3, 1936 in Peru, Nebraska. He attended school in Peru, where he graduated from high school. Jerry enlisted in the U.S. Air Force... View Obituary & Service Information

The family of Jerry D. Mertes created this Life Tributes page to make it easy to share your memories.

Jerry Delmar Mertes, one of five children of Edmond Peter and...

Send flowers to the Mertes family.