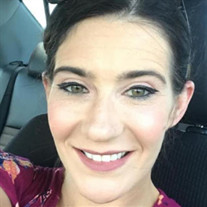 Jessica Lee Smith, one of two daughters of Todd Huffman and Johnnie Douglas, was born August 26, 1983, at Auburn, Nebraska. Jessica spent her entire life in Southeast Nebraska. Jessica was blessed with two sons Cassius and Henry Cotton. She was then united in marriage to Jim Smith on May 17, 2012 and they would be blessed with a son, Erin. Jessica also welcomed Jim’s children Kyla, Kristin, Kyle, and Kody as her own. Jessica began working for the United States Postal Service and was first employed at the Peru Post Office. She then was moved to the Post Office in Auburn, but still occasionally filled in at surrounding post offices in the area. Jessica enjoyed working at the post office and some of the people she saw on daily occurrences. In her free time, Jesse enjoyed reading books, writing, and exercising. She loved to be in the kitchen cooking and was one hell of a baker. Jesse also loved music, art, and shopping, mainly online shopping but if something didn’t fit it was a good excuse for a trip to Omaha. Jesse had two St. Bernards, Gus and Maggie, that she enjoyed spending time with, but her biggest joy in life came from her family. On Sunday, July 11, 2021, Jessica passed away having reached the age of 37 years, 10 months, and 15 days. She was preceded in death by her son Henry Cotton, father Todd Huffman, Terry Cotton, mother-in-law Roberta Smith, and sister-in-law Shelly Smith-Myers. Those left to mourn her loss include her husband Jim Smith of Peru; children Cassius Cotton, Erin Smith both of Peru, Kyla (Patric) Tiemeyer of Hamburg, IA, Kristin Smith of Brownville, Kyle Smith of Brownville, Kody Smith of Rock Port, MO; grandchildren Taytin and Elsi Tiemeyer, Sunny J and Motley Smith; mother Johnnie (José) Casas of Andrews, TX; father-in-law Jim “Salty” Smith of Brownville; grandmother Judie Douglas of Peru; sister Kelsey Huffman and son Eldon James Keran of Peru; sister Hayden Pasco of Auburn; sister-in-law Kelly (Travis) Ragan of Leavenworth, KS; aunts, uncles, nieces, nephews, other relatives and friends. Visitation will be on Saturday, July 17, 2021, 9:00 a.m. to 6:00 p.m. at Hemmingsen Funeral Home in Auburn. Burial of ashes will take place at a later date in Nemaha Cemetery at Nemaha. Memorials are suggested to family choice.

The family of Jessica Lee Smith created this Life Tributes page to make it easy to share your memories.

Jessica Lee Smith, one of two daughters of Todd Huffman and Johnnie...