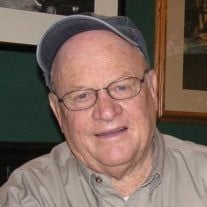 Jimmie Dee Jarvis, one of four children of Jimmie J. and Evelyn (Mitchell) Jarvis, was born June 29, 1937 in Auburn, Nebraska. Jim attended school at Nemaha, Nebraska, graduating from high school there in 1955. After high school he attended Peru State College for a year. After a couple of thwarted attempts, Jim eloped with Patricia Coulter. They were married in Beatrice, Nebraska on May 23, 1959. Three children, Jim, Susan, and Kate, were born to this union. Jim had a varied work history before settling on his final career. While still in high school, he worked carnivals during the summers for the Darling’s. He also stripped blue grass with his dad. Later Jim drove rock trucks and worked at a packing plant in Omaha, Nebraska. After moving back to Auburn he worked at the Gamble’s Store in town, later moving to Atlantic, Iowa to manage the store there. In May of 1967 Jim began his career with Western Auto. He started in Atlantic and then moved to Lincoln, Nebraska. His upward moves with the company included Rolla, Missouri and then back to Auburn, where the family lived for five years. Promotions necessitated moves to Salina, Kansas for 13 years and finally to Kansas City, Missouri. After 10 years there Jim retired from Western Auto as Sales and Operations Manager. In 2001 Jim and Pat moved back to Auburn, where Jim worked shutdowns at Cooper Nuclear Station in Brownville, Nebraska and at a plant in Palo Verde, Arizona. He also drove a school bus for the Auburn Public Schools. Jim was a member of the Auburn Christian Church, where he served as Elder and went on mission trips with the youth of the church. He served on the Advisory Board of the Good Samaritan Society-Auburn, the Rural Water Board, as an officer with Neighbor to Neighbor, and was a member of the Auburn Country Club. In addition to golfing, Jim enjoyed working on home improvement projects. He enjoyed sports in general, and particularly Husker and Green Bay football. After a diagnosis of cancer, Jim, along with Pat and the rest of his family, put up a good fight against the disease. On Thursday, January 16, 2014, with family around him, Jim went to be with his Lord while lying in his bed at home. His parents Jim and Evelyn, father-in-law Eldo Coulter, and sister-in-law Joan King preceded him in death. Jim is survived by his wife Pat of Auburn; children and spouses Jim and Kim Jarvis of Kansas City, Missouri; Susan and David Thomas of Auburn; Kate Jarvis and friend Jason Burow of Auburn; grandchildren Dustin Thomas and friend Ariel Linville, Holly Thomas and husband Gabriel Cisneros, Dallas and wife Ashlee Omsted, Jill and husband Ike Nwabuonwu, Kassie and husband Shane Stone, Maddie Brown, Hailey Brown, and Jared Jarvis; great-grandchildren Tatyanna, Aaliyah, Emmanuel, Makiya, Emeka, Elijah, Reece, Taylor, Charlie, Kairi, Aerith, Jocelyn, Quinn, Breece, Levvie, Leah, December, Camille, Ofelia, and one more on the way; brothers Terry and wife Mary Jarvis of Auburn; Steven Jarvis of Auburn; sister Linda Belik of Denver, CO; mother-in-law Agnes Coulter of Auburn; brothers-in-law Mike and wife Marg Coulter of Auburn; Larry and wife Stephanie King of Norwalk, IA; other relatives and many friends. A funeral service will be Tuesday, January 21, 1:00 p.m. at the Auburn Christian Church. Following a luncheon, burial will be at the Nemaha Cemetery near Nemaha. Visitation will be at the funeral home Monday 9:00 a.m. to 8:00 p.m., with family greeting friends 6:00 to 8:00. Memorials are suggested to For God’s Children International or Nebraska Christian College.

The family of Jim D. Jarvis created this Life Tributes page to make it easy to share your memories.

Jimmie Dee Jarvis, one of four children of Jimmie J. and Evelyn...

Send flowers to the Jarvis family.