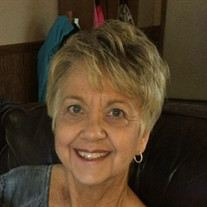 Joan Katherine (Suhr) Wittmann, the only child of John and Loris (Kroeger) Suhr, was born September 1, 1946, in Fremont, Nebraska. She was baptized September 22, 1946, and confirmed April 10, 1960 at St. John’s Lutheran Church in Hooper, Nebraska. Joan attended rural school near her home and graduated from Scribner High School in 1964. She went on to attend Midland Lutheran College in Fremont, where she earned her degree in Business Education in 1968. On June 16, 1967, Joan was united in marriage to Dennis Wittmann at St. John’s Lutheran Church. They were blessed with four children: Amy, Jill, Kristin, and Zachary. Joan and Dennis and family lived in several towns following Dennis’s career in Nebraska before moving to Auburn in 1994. She began working at Nemaha County Hospital right after moving to Auburn, and was there for 22 years. Through all of her career choices, Joan focused on raising her children as her priority. Upon moving to Auburn, Joan became a member of Trinity Lutheran Church. She played the organ at church, extending to 58 years her service of playing music for the Lord. She was active in LWML as well as various church boards through the years. Joan had served on the Southeast Nebraska Crisis Pregnancy Board. She loved to play Free Cell, and couldn’t pass up a “bonus with purchase” on the make-up she used. Family was always first with Joan. Throughout the years, she seldom missed an activity that involved her children or grandchildren. A sudden illness resulted in Joan being admitted to the Nemaha County Hospital and then returning home. She was then rushed to CHI Health-St. Elizabeth in Lincoln, Nebraska, where she passed away on Sunday, June 19, 2016. She was blessed with 69 years, 9 months, and 18 days of living in Christ in her earthly home, and 49 years of marriage to Dennis. She was preceded to her heavenly home by her parents. Those who will remember Joan with love and fondness include her husband Dennis of Auburn; daughters and sons-in-law, Amy and Mike Koski of Kearney, NE; Jill and Seth Larson of Chaska, MN; Kristin and Roan Howard of Kearney, NE; son Zachary and fiancée Leslie Alitz of Memphis, TN; grandchildren Emily, Ryan, Baylee, Spencer, Parker, Madisyn, Anna, Chloe, and Hudson; many other relatives and friends. A service to honor Joan’s life in Christ will be Thursday, June 23, 10:00 a.m. at Trinity Lutheran Church in Auburn. Visitation will be at the funeral home Wednesday 9:00 a.m. to 8:00 p.m., with family greeting friends 6:00 to 8:00. Committal service and burial will be Thursday, 3:00 p.m., at St. John’s Lutheran Cemetery near Hooper, NE. Memorials are suggested in lieu of flowers to Kids of His Kingdom Day Care, The Lutheran Hour, or Mission Central.

The family of Joan Wittmann created this Life Tributes page to make it easy to share your memories.

Joan Katherine (Suhr) Wittmann, the only child of John and Loris...

Send flowers to the Wittmann family.