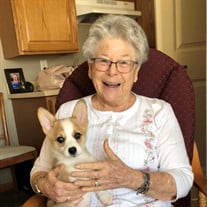 Joan (Rendleman) Harms, one of four children of Melvin and Zelda (Porter) Rendleman, was born April 7, 1934, in Sparks Hill, Illinois. Her early education was all in Hardin County, graduating from Cave-in-Rock High School in 1950 at age 16. Joanie met her future husband, Kenneth W. Harms, while he was on leave, attending a holiday church function in Champaign, IL, where she was working at the time. They were married 6 months later June 7, 1953, again in Champaign, IL. The couple lived in Panama City, Florida until Ken completed his military commitment with the US Air Force in 1955. They then made their home in rural Auburn, Nebraska so Ken could farm the family farm. They would be blessed with four children: Mark, Russ, Melanie, and Brad. She and Ken had a variety of friends and adventures together in their 48 years of marriage. Boating at Spring Lake and Big Lake, returning to Panama City to stay on the beach in the winter, traveling down to Southern Illinois or to Colorado to spend time with family, attending lots of Husker football games and occasional trips to Mexico were all happy times and great memories for her. While she always focused her attention on raising her children and running the house, Joanie did work outside of the home. She served at the Nemaha County Courthouse in Auburn, first as the County Child Support Officer then as Court Bailiff. She had also worked as a salesclerk at a women’s shop in Auburn. Joanie was a member of St. Paul Lutheran Church in Auburn and the Auburn Young Women’s Club, where she served as president. She also loved to golf and belonged to the Auburn Country Club. She was a member of the 1990 Women’s golf league championship team. Joanie enjoyed playing bridge, photography, bird watching, spending hours working in her gardens and had several girl trips with close friends and family after losing Ken. Family was her core. She loved going to anything her grandchildren were involved in. They lovingly referred to her as “mammy” After Ken passed away in June of 2001, Joanie stayed at their farm until she turned 80, then moved into Auburn. In January of 2019 she relocated to Haven Manor assisted living in Hickman, then to High Plains Memory Care in Lincoln in August of 2020 to be closer to her daughter, Melanie. It was there she passed away on Thursday, January 6, 2022, at the age of 87 years, 9 months, and 2 days. In addition to her husband Ken and her parents Joanie was preceded in death by her brothers Jim Rendleman and Elbert and sister-in-law Dorothy Rendleman. Left to remember Joanie’s fun and loving ways are her children Mark Harms of Auburn, Russ Harms of Lincoln, Melanie Miller (Dave Van Pelt) of Lincoln, Brad Harms (Stephanie) of Auburn; grandchildren Matt Harms (Lyndsey), Shanna Joan Bridges (Jake), Kiley Miller, Cody Miller, Derek Harms (Tiff), Tyler Harms (fiancée Shelby Stevens), Hunter Harms; great-grandchildren Harper and Miles Harms, Bowen and Bentley Joan Bridges, Adrian and Alexander Harms; sister Jane Tosh (Gary) of Tunnel Hill, IL; other relatives and friends. A memorial service will be Thursday, January 27, 10:30 a.m. at St. Paul Lutheran Church in Auburn. Visitation will be at the funeral home Wednesday, January 26, 9:00 a.m. to 8:00 p.m., with family greeting friends 6:00 to 8:00. Memorials in lieu of flowers are suggested to family choice.

Joan (Rendleman) Harms, one of four children of Melvin and Zelda (Porter) Rendleman, was born April 7, 1934, in Sparks Hill, Illinois. Her early education was all in Hardin County, graduating from Cave-in-Rock High School in 1950 at age... View Obituary & Service Information

The family of Joanie Harms created this Life Tributes page to make it easy to share your memories.

Joan (Rendleman) Harms, one of four children of Melvin and Zelda...

Send flowers to the Harms family.