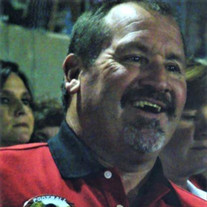 John Duane Coatney, 66, of Peru, Nebraska, unexpectedly passed away on March 23, 2021 at his home. He leaves behind his wife Penelope, his three “babies” Quentin, Kiefer, and Alex. His daughter-in-law Logan and his grandkids Holden, and Karter. John was born in Nebraska City on November 30, 1954 to Boyd and Marilyn Coatney. He grew up with his brothers Mark and Scott and his sister Dianne. He graduated from Auburn High School in 1973 where he was a multi-sport athlete and even a wrestling state champion. Following High School John attended college at Peru State College for a year. Where he then stepped up to help with the family farm. While living in Peru he met the love of his life Penny Smith. These two love birds quickly began filling up their nest when they gave birth to their first-born Quentin. Three years later came the second son Kiefer. Then five years after that came the third son Alex. One of John's favorite hobbies was going to his sons’ sporting events and activities. He never missed a wrestling match, football game, baseball game, and so on. He continued this hobby all the way through his years. He was always everyone’s number one fan. John's second favorite hobby was drinking an ice-cold beer and talking with friends. He was always a social butterfly and was considered the life of the party. You never saw him without a smile on his face or without a drink in his hand. His family, friends, and especially his “babies”, will continue to carry on his legacy and share the countless memories that can never be forgotten! Other survivors include his mother Marilyn Coatney of Peru; father-in-law Fay “Punk” Smith of Hamburg, IA; siblings Mark (Laurie) Coatney of Marble Falls, TX, Dianne (Dennis) Thomas of Kenosha, WI, Scott (Debbie) Coatney of Peru; sisters-in-law Faye (Lester) Bruce of Hamburg, IA, Angie Smith-Warren of Concord, NH, Suki (Jay) Fischer of Auburn, Natasha “Niki” Nennemann of Hamburg, IA; brother-in-law Roy “Bub” (Amy) Smith of Hamburg, IA; numerous nieces, nephews, other relatives and many friends. John was preceded in death by his father Boyd Coatney; mother-in-law Marilyn Smith; sister-in-law Andrea “Hogie” Smith; grandparents Earl and Catherine Applegate, Cecil and Norma Coatney. A funeral service will be Tuesday, March 30, 10:00 a.m. at Al Wheeler Activity Center in Peru. Masks and social distancing are strongly encouraged, Peru State College was kind enough to allow use of their facilities, please adhere to these policies. Burial will follow in Mt. Vernon Cemetery at Peru. Visitation will be at the funeral home Monday 9:00 a.m. to 8:00 p.m., with family greeting friends from 6:00 to 8:00. Memorials suggested to family choice.

John Duane Coatney, 66, of Peru, Nebraska, unexpectedly passed away on March 23, 2021 at his home. He leaves behind his wife Penelope, his three &#8220;babies&#8221; Quentin, Kiefer, and Alex. His daughter-in-law Logan and his grandkids... View Obituary & Service Information

The family of John Coatney created this Life Tributes page to make it easy to share your memories.

Send flowers to the Coatney family.