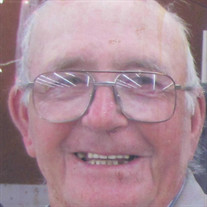 John Derward Joy, Jr. was born near Stella, Nebraska October 28, 1935, to Jack D. and Gertrude (Miller) Joy, the eldest of four sons. Jack attended school at Stella, then Shubert, where he graduated from high school in 1954. He loved playing football while in school. After graduation he began farming with his dad and helping with the livestock. Jack lived near Shubert and Stella his whole life. In May of 1957, Jack was united in marriage to Yvonne Faust in Shubert. They would become parents to four sons: Kent, Brian, Marlin, and Wayne. Jack farmed and raised livestock, including Angus and Holstein cows, hogs, goats, and chickens. Of his livestock, the Black Angus was his favorite, later changing to the Red Angus. He also raised Blue Heeler dogs. Jack enjoyed riding horses and going to horse shows and rodeos. He belonged to the Stella Saddle Club and took a turn at being president of the club one year. He really wanted their sons to ride and rope and spent much time helping them to succeed at roping calves. Jack also helped at the county fair with 4-H livestock and horse events. Jack always liked his neighbors and wanted to help them any way he could. He enjoyed playing cards, especially Pinochle. One thing he disliked was hoeing in the garden but was pleased with helping harvest and canning and freezing the surplus. He also enjoyed growing lots of sweet corn and was always delighted to give it away. Jack regretted the day the feeder pigs got out and found the tomato patch that was ripe and ready to be picked, but later it became a funny story that he told over and over. He enjoyed other funny stories about family, friends, and neighbors and listening to them again while living at the nursing home. A special event for the family was Jack and Yvonne ending the year by hosting their grandchildren for the “Hillbilly Party” on New Year’s Eve. He first became a member of the Shubert Christian Church, then transferred to the Auburn Christian Church, where he enjoyed helping the youth group and visiting shut-ins, in addition to serving as an Elder. Jack later attended Grace Bible Fellowship near Stella. When his health required it, Jack became a resident of Colonial Acres in Humboldt. It was there he passed away on Thursday, March 31, 2022, at the age of 86 years, 5 months, and 3 days. He was preceded in death by his parents, one brother in infancy, and parents-in-law Art and Lillian Faust. Jack is survived by his wife Yvonne; sons and daughters-in-law Kent and Paulette (Kruse), Brian and Kelly (Roe), Marlin and Rhonda (Gentert), Wayne and Deb (Moore); grandchildren Jessie (Brad) Urban, Molly (Nick) Manion, Trent Joy (fiancé Ashton Johnson), Jana Joy, Jacob Joy, Matt (April) Joy, Megan (Cade) Herr, Shannon (Aaron) Kirkpatrick, Haley (Willie) Tryon; 16 great-grandchildren; brothers Jerry (Chris) Joy, Jim Joy; other relatives and friends. A funeral service will be Monday, April 4, 2:00 p.m. at Auburn Christian Church in Auburn. Burial will follow in Prairie Union Cemetery near Shubert. Visitation will be at the funeral home Sunday noon to 6:00 p.m., with family greeting friends 4:00 to 6:00. Jack's funeral will be Livestreamed via the Church's website at: https://www.auburnchristian.org/live/ Memorials are suggested to family choice.

John Derward Joy, Jr. was born near Stella, Nebraska October 28, 1935, to Jack D. and Gertrude (Miller) Joy, the eldest of four sons. Jack attended school at Stella, then Shubert, where he graduated from high school in 1954. He loved... View Obituary & Service Information

The family of John D. "Jack" Joy created this Life Tributes page to make it easy to share your memories.

Send flowers to the Joy family.