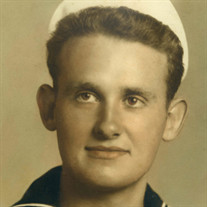 John William McFadden was born July 18, 1925 in Wichita, Kansas to William Ruthvan and Dorothy Lulu (Olsen) McFadden. One of seven children, John went to schools in Kansas, Texas, and California as his family moved from state to state. He graduated from Los Angeles Metropolitan High School, and later earned a degree in mechanical engineering at Cal Poly in Pomona, California. On July 16, 1943 John enlisted in the U. S. Coast Guard as an apprentice seaman. He served alongside U. S. Navy personnel in the Pacific during World War II and survived the Battle of Leyte Gulf. John received his honorable discharge from the Coast Guard on October 4, 1945 as Fireman First Class. John was united in marriage to Cornette Davis on July 3, 1971 in Sun City, Arizona. John and Cornette made their home in the Phoenix area until 1989, when John retired and they moved to Stella, Nebraska. John had driven a home delivery truck for Hellman’s Bakery as a young man. After receiving his college degree he worked at International Harvester and Gilbert Pump. John then became an agent for State Farm Insurance, helping many families, individuals, and businesses with their insurance needs before retiring after 38 years with the company. Part of the “Greatest Generation,” John was a man of many interests. He served as a lifeguard at the YMCA, had been a member of the BPOE Elks and received an award from the Red Cross for the amount of blood he donated for others. John was an avid sailor and pilot and he could fix anything. He was an ardent tinkerer, loved his workshop and a good junkyard. John and Cornette also traveled extensively across the States and internationally. After a diagnosis of multiple cancers, John fought his last battle against the disease. With the help of Cornette, other family, and friends he was able to stay at home in Stella. It was there, on the night of Thursday, September 20, 2018 he passed away at the age of 93 years, 2 months, and 2 days. He was preceded in death by his brothers Bob, Harry, and George, and sister Dorothy. Those left to remember his special ways include his wife Cornette of Stella; sons Mark, Vance, Brett, all of Phoenix, AZ; son Brian and wife Katherine of Sacramento, CA; daughter and son-in-law Stephanie and Tom Kernaghan of Queen Creek, AZ; grandchildren Kelly, Scott, Brittnany, Allison, Brianna, Georgia, Max, Sam, and Andy “Cooper”; great-grandchildren Michael, Connor, Landen, Finley, Raya, Justus, Ryker, Lucy and Pearl; sisters Shirley Wyss of Yucca Valley, CA; Mary Brown of Houston, TX; other relatives and friends. John’s body was cremated, and a Celebration of Life will be at a later date, followed by burial at sea. Memorials are suggested to Tabitha Hospice, 1114 Grundman Blvd, Nebraska City; or Wounded Warriors Family Support, 11218 John Galt Blvd, Omaha, NE, 68137.

John William McFadden was born July 18, 1925 in Wichita, Kansas to William Ruthvan and Dorothy Lulu (Olsen) McFadden. One of seven children, John went to schools in Kansas, Texas, and California as his family moved from state to state.... View Obituary & Service Information

The family of John "JW" McFadden created this Life Tributes page to make it easy to share your memories.

Send flowers to the McFadden family.