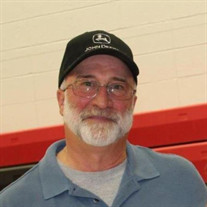 John Stepongzi, one of six children of Albert and Tina (Furnari) Stepongzi, was born July 31, 1946, in Montclair, New Jersey. Growing up, John worked hard on the family farm. He graduated from Newton High School in 1965. From there he enlisted in the United States Army and was trained as a diesel mechanic. John was honorably discharged in 1968. He spent the remainder of his working days driving across the county in his semi. John was proud to become the owner/operator of his own truck. When he wasn’t on the road, he was self-employed using his equipment to do various jobs. When he wasn’t busy making a buck, John was doing things for others. John was a kind and humble man. You could tell he was proud of his accomplishments and enjoyed talking about them, but taking a compliment was difficult for John. He was happy seeing others happy. John enjoyed being outside and tinkering with anything and everything. He could fix whatever required his attention. John also enjoyed auctions, shopping on Big Iron, truck shows, fairs, and shopping with Diane. John could talk to anyone and he did it well. Pretty sure that is how he got all the good deals. Surely people were thinking “Just mark it down so we can all go home.” His favorite thing was spending time with his families in New Jersey and Nebraska. His grandchildren were so important to him. John became a grandfather in 1996. There was no greater love in this world than the love that John had for his grandchildren. He always looked forward to their visits and playing with them, as he was also…a child at heart. John and Diane spent the last 27 years together on the farm outside Auburn. A lot of fun and entertaining sarcasm kept them young. They missed each other when they were apart, but as they say absence makes the heart grow fonder. He enjoyed the animals and never hesitated to let Diane buy and plant whatever she wanted. John was healthy and happy until he passed at Bryan West Hospital in Lincoln on August 28, 2021, at the age of 75 years, after he fought strong for 40 days against Covid. His parents, brother Albert, Jr., and brother-in-law John Langeraap preceded him in death. Those left to remember John’s caring ways include his wife Diane of Auburn; daughter Tammy Stepongzi; stepchildren Rena (Darin) Holben, Richard (Debra) Tanner, Russel (Courtney) Tanner; grandchildren Danyel, Ryley, Evelyn, Jersie, Audrey, and Moxen; great-grandchild Korbyn; sisters Joan Gregory, Marie Langeraap, and Eva Garber; brothers Joseph Stepongzi and Alfonso Stepongzi; beloved nieces & nephews, great-nieces & -nephews, other relatives and friends. A funeral service will be Friday, September 3, 2:00 p.m. at Hemmingsen Funeral Home in Auburn. John’s body will be cremated following the service. View John's service via Livestream at: https://livestream.com/accounts/13846112/events/9831046 Memorials are suggested to be used at the family’s discretion.

John Stepongzi, one of six children of Albert and Tina (Furnari) Stepongzi, was born July 31, 1946, in Montclair, New Jersey. Growing up, John worked hard on the family farm. He graduated from Newton High School in 1965. From there he... View Obituary & Service Information

The family of John Stepongzi created this Life Tributes page to make it easy to share your memories.

John Stepongzi, one of six children of Albert and Tina (Furnari)...

Send flowers to the Stepongzi family.