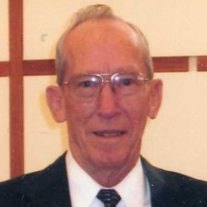 Karl James Fischer, the sixth of seven children of Karl Jacob and Fredaricka (Weishaar) Fischer, was born May 19, 1930 on the family farm near Alma, Nebraska. He was baptized May 25, 1930 at Peace Lutheran Church in Alma by Pastor Hassark and confirmed at the same church April 1, 1945 by Pastor Hollinson. Karl attended District 72 School through the 8th grade, and graduated from Republican City High School in the spring of 1948. On March 5, 1955 Karl was united in marriage to Shirley E. Forbes at the Methodist Church in Huntley, Nebraska. They were blessed with three children: Bruce Allen, Daniel Lee, and Karen Elaine. Karl was a member of Trinity Lutheran Church in Auburn, where he kept active in church affairs. In his spare time he very much enjoyed working in his shop and his yard, and the time he spent with his coffee buddies discussing various issues and news. After Shirley’s death on July 4th of 2010, Karl continued to live at their home in Auburn. Following a six year battle with cancer, Karl passed away at Tabitha Journey House in Lincoln, Nebraska on Monday, October 14, 2013 at the age of 83 years, 4 months, and 25, days. In addition to his wife and parents, Karl was preceded in death by brother and sisters: Nora Rawson, Doris Hauggermann, Robert Fischer, and Ella Brugh. Karl is survived by his sons Bruce and wife D’Ann Fischer of Lincoln; Dan and wife Shelly Fischer of Kansas City, MO; daughter Karen and husband Jim Bright of Hutchinson, KS; grandchildren Katelyn and Karl “Jacob” Fischer; Madison, Joshua, Arielle, and Jordan Christiansen; sisters Maye Dorn; Jeanette Warren; other relatives and many friends.

Karl James Fischer, the sixth of seven children of Karl Jacob and Fredaricka (Weishaar) Fischer, was born May 19, 1930 on the family farm near Alma, Nebraska. He was baptized May 25, 1930 at Peace Lutheran Church in Alma by Pastor Hassark... View Obituary & Service Information

The family of Karl "Jim" Fischer created this Life Tributes page to make it easy to share your memories.

Send flowers to the Fischer family.