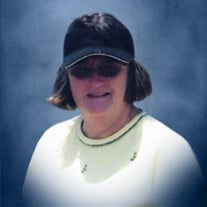 Katherine Ann (Den) Anderson, daughter of Wayland and Patricia Ann (Allgood) Den, was born April 27, 1951 in Auburn, Nebraska. She attended school in Auburn, graduating from Auburn High School in 1969. Kathy attended the Baptist Church in Auburn in her younger years. On October 16, 1971, Kathy was united in marriage to Dennis Anderson at the Brownville Christian Church by Rev. Ward Merritt. They made their home in Auburn, and were blessed with two daughters, Stacy and Kelli. After her marriage, Kathy worked at American Meter in Nebraska City. She took time off from work outside the home to be a housewife and mother as her daughters were growing. When she went back to work, it was at the King Louie sewing factory in Auburn. She later worked at El Senor’s, Southside Bar, and Glenn’s Corner Market, all in Auburn. She retired from Glenn’s at age 62 to help with her grandchildren. Kathy was a member of the Auburn Legion Auxiliary and the Auburn Eagles Club. She was a “gamer” of sorts, enjoying bingo, slots at the casinos, “Candy Crush”, Sudoko, and jigsaw puzzles (the big ones). In earlier years, she liked playing Scrabble and Aggravation with her mother and sister. Kathy was a big fan of Husker football, and enjoyed watching the volleyball team as well. Kathy had received a cancer diagnosis, and while dealing with that disease, was faced with some other health issues. She was in and out of hospitals for quite some time, and on Saturday, December 30, 2017, was admitted to Bryan East Medical Center in Lincoln, Nebraska. It was there she passed away, on Friday, January 5, 2018, at the age of 66 years, 8 months, and 9 days. Her parents, Wayland and Patricia, step-father Glen Palmer, brothers Greg Palmer and Jeff Palmer, and half-sister Holly preceded her in death. Kathy is survived by her husband Dennis of Auburn; daughters and sons-in-law Stacy and John Taylor of Auburn; Kelli and Ken Hatten of Auburn; grandchildren Brooke Taylor, Paige Taylor and boyfriend Jeremy Sloop, Katelyn Taylor, and Wyatt Taylor; Brett Hatten; great-grandchild Taeyln; brother and sister-in-law Randy and Cheryl Den of Midvale, UT; sister Kim Palmer of Auburn; half-sister Denise Den and her husband Rob Jones; brother-in-law Vince and wife Julie Anderson of Elmwood; sister-in-law JoAnne and husband Maurice Molleur of Greensboro Bend, VT; other relatives and many friends. A funeral service will be Wednesday, January 10, 11:00 a.m. at Hemmingsen Funeral Home in Auburn. Visitation will be Tuesday 9:00 a.m. to 8:00 p.m., with family greeting friends 6:00 to 8:00. Kathy’s body will be cremated following the service. Memorials are suggested to Nemaha County Giving Hope Cancer Fund. To view Kathy's service live click here: https://livestream.com/accounts/13846112/Kathy

The family of Kathy Anderson created this Life Tributes page to make it easy to share your memories.

Send flowers to the Anderson family.