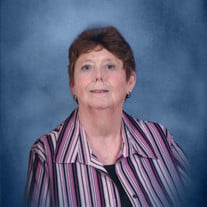 Kathy Sue (Smith) Volker, daughter of Searcey and Vivian (Figgins) Smith, was born June 24, 1955 in Auburn, Nebraska. She was the only daughter, and joined three brothers in the family. Kathy was baptized in the Auburn Methodist Church on Christmas day in 1955 by Pastor M.R. Hinds. She attended school in Auburn, graduating from Auburn High School in 1974. She then went to Southeast Community College, earning a degree as a Medical Secretary. In 1979 Kathy was confirmed by Pastor Roger Hoffman at St. James Lutheran (Long Branch) Church near Humboldt, Nebraska. On July 21, 1979, she was united in marriage to Gary Volker at Long Branch Church, the ceremony performed by Pastor Hoffman. Three children, Leann, Deann, and Brandon, were born to this union. Kathy devoted her time to being a full-time homemaker, raising her children and performing the household chores. However, she also found time to volunteer in her church and community. As a member of St. James Lutheran Church, Kathy taught Sunday school and Bible school, and she served as an EMT on the Johnson Rescue Squad. Later in life, she and her daughter Leann volunteered with the Johnson Rag. Throughout her life, family was important to Kathy. From raising her own children, to doing her best to spoil granddaughter Emma, she loved to be with family. Kathy also spent many hours with Leann and the Stitch-A-Long group in Johnson. Kathy was plagued by illness for a good part of adulthood. In 2008, she received a kidney transplant which gave her a new “lease on life”. On the night of Monday, June 5, 2017, after a few days of feeling ill, Kathy was rushed to the Nemaha County Hospital in Auburn. She passed away there that same night, having reached the age of 61 years, 11 months, and 12 days. Her parents, brother Ron, and infant daughter Deann preceded her in death. Those who survive Kathy include her husband Gary of Johnson; daughter Leann Volker of Johnson; son Brandon Volker and his fiancée Trisha Neumeister of Auburn; granddaughter Emma of Auburn; brothers and sisters-in-law Donald and Carol Smith of Auburn; Dennis and Kathy Smith of Roberts, IL; nieces, nephews, other relatives and friends. A funeral service will be Friday, June 9, 10:30 a.m. at St. James Lutheran (Long Branch) near Humboldt. Burial will follow in the church cemetery. Visitation will be at the funeral home in Auburn Thursday 9:00 a.m. to 8:00 p.m., with family greeting friends 6:00 to 8:00.

Kathy Sue (Smith) Volker, daughter of Searcey and Vivian (Figgins) Smith, was born June 24, 1955 in Auburn, Nebraska. She was the only daughter, and joined three brothers in the family. Kathy was baptized in the Auburn Methodist Church... View Obituary & Service Information

The family of Kathy Volker created this Life Tributes page to make it easy to share your memories.

Send flowers to the Volker family.