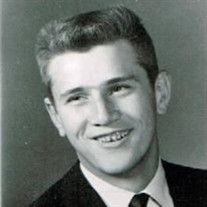 Keith Herbert Edmonds, one of five children of Herbert “Pat” and Lydia M. (Roberts) Edmonds, was born July 20, 1944 in Auburn, Nebraska. Keith grew up in Brock, the family moved to Kansas City in the late 1950’s, but Keith moved back to Brock to live with his aunt and graduated from Brock High School. After graduating, Keith went to barber school in Omaha and lived with another aunt while there, his Aunt Katherine, someone he viewed as a second mother. Keith also considered himself a graduate of the School of Hard Knocks. On March 27, 1965, Keith was united in marriage to Judith Buethe at St. Peter’s Lutheran Church near Elk Creek, Nebraska. The couple would be blessed with two sons, Kip and Mark. The family made their home in Talmage. Keith began barbering in Talmage. He then worked for Brock Grain, as well as side jobs for several area farmers. Keith then began a 35-year career with Pioneer Hybrid Seed Company, serving as the district sales manager. Keith’s motto when referring to his sales reps was always “If they don’t know I care, they won’t care what I know.” While in Talmage, Keith served his community in many ways. He was a member of the Volunteer Fire Department and Rescue Squad, he served on the village board, and was even mayor for several terms. Keith was also a member of Trinity Lutheran Church in Talmage and served on the church council, serving as president multiple times. After the church disbanded and formed Faith Lutheran Church, he served on the council of Faith Lutheran as well. In his spare time, Keith loved to hunt and fish, he was always looking for farm ponds while on the road for work. He made fishing trips to Harlan County Reservoir for 30+ years. Keith was also a handyman, he was a master when it came to taking things apart, but maybe not so much of putting things back together, but there was nothing he was afraid to try. Keith’s life revolved around his family and friends. He was an avid fan of Nemaha Valley High School athletics when the boys were in school, never missing an activity they were involved in. When he was blessed with grandchildren, he took great pride in their dedication to the activities they were involved in, and loved watching them participate. Keith passed away on September 19, 2020, having reached the age of 76 years, 1 month, and 30 days. He was preceded in death by his parents, parents-in-law Milton and Anne (Heuer) Buethe, brother Roger “Butch” Edmonds, brothers-in-law Charles Floyd Workman, Joe McWilliams, and sister-in-law Anita Edmonds. Those left to mourn Keith’s passing include his wife Judy of Omaha; sons and daughters-in-law Kip and Jennifer Edmonds of Gretna, Mark and Julie Edmonds of Evergreen, CO; grandchildren Jordan Edmonds and special friend Crystal Sierra of Omaha, Kale, Lydia, and Jenica Edmonds of Gretna, Logan and Colton Edmonds of Evergreen, CO; sister Frances Workman (Tom Freeman) of Table Rock, brother Kenneth Edmonds of Kansas City, MO, sister Beverly McWilliams of Kansas City, MO; sister-in-law Janet (Chuck) Hawley of Brock; nieces, nephews, other relatives and friends. A memorial service will be held Sunday, September 27, 2020, 5:00 p.m. at Hemmingsen Funeral Home in Auburn. Family will greet friends on Sunday at the funeral home from 3:00 p.m. to 5:00 p.m. A private burial of ashes will take place at a later date in St. Paul Cemetery near Talmage. Memorials are suggested in lieu of flowers to family choice. To view Keith's service click on the following link: https://livestream.com/accounts/13846112/events/9324229

The family of Keith H. Edmonds created this Life Tributes page to make it easy to share your memories.

Keith Herbert Edmonds, one of five children of Herbert “Pat”...

Send flowers to the Edmonds family.