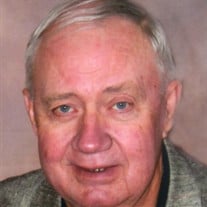 Keith Roger Stanley, “Yogi” to his many friends and acquaintances, passed away peacefully on July 25th at the age of 71 years, ten months, and 25 days. He was a much loved fixture in the Stella, Shubert, and Auburn areas, known for his gregarious nature, easy smile, and friendly wave. Keith was the sixth of seven children born to Louie and Ella Stanley. He was baptized at the family home in Shubert as an infant, confirmed at Trinity Lutheran Church in Stella in 1956, and graduated from Stella School in 1961. Keith married Mary Ann West in 1963 and the couple settled in the Stella area. Sons Greg and Scott were born before the couple divorced in 1973. As a longtime resident of the Stella area he was involved in the community as a member of the Stella Town Board and Volunteer Fire Department. Keith farmed the family farm northeast of Stella for 37 years. And for 42 years he was a fixture at the Auburn Cabinet Factory before retiring in 2007. On September 28, 1991, Keith married Joyce Fritz Ankrom whom he referred to as “the love of his life”. The couple moved to Auburn in 2011 and had 24 beautiful years together. One of the highlights of his life was a pilgrimage to Israel with Joyce in 2012 where he got to “walk where Jesus walked”. While there Keith reaffirmed his baptismal vows and during a visit to Canaan he & Joyce renewed their wedding vows. One of Keith’s favorite things to do in life was to drive around the countryside. As some friends would attest, some of those rides weren’t your average “Sunday drive”. He also enjoyed doing puzzles, word find, and going for coffee with friends. He was a happy gentleman of few words but was quick to respond with a “git ‘er done”, “10-4”, or “what will be, will be”. He will be missed and fondly remembered by his family and many friends. He is survived by his wife, Joyce; sons Greg Stanley & wife Didi of Antioch, CA and Scott Stanley & wife Rae of Lincoln, NE; stepsons Jim Ankrom & wife Stacey of Pasco, WA; and Mike Ankrom & wife Jodi of Arlington, WA. Grandchildren: Morgan, Margaux, Ella, Chloe, and Taylor Stanley. Step grandchildren Shelby Ankrom, Kyle Stiegel, Derek Stiegel, Celeste Marcus, and step great-grandson Jimmy Drummond. Sisters: Doris Johnson of Omaha, NE; Elva Jean McNeeley of Enid, OK. Brothers: Richard Stanley of Auburn; and Mark Stanley of Monument, CO. In lieu of cards or flowers, the family would ask you to consider a donation to the charity of your choice in Keith’s name.

Keith Roger Stanley, &#8220;Yogi&#8221; to his many friends and acquaintances, passed away peacefully on July 25th at the age of 71 years, ten months, and 25 days. He was a much loved fixture in the Stella, Shubert, and Auburn areas, known... View Obituary & Service Information

The family of Keith R. Stanley created this Life Tributes page to make it easy to share your memories.

Keith Roger Stanley, “Yogi” to his many friends and acquaintances,...

Send flowers to the Stanley family.