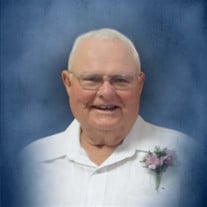 Keith Edward Wheeler, one of five children of Richard and Helen (Andrew) Wheeler, was born December 30, 1932, in Auburn, Nebraska. Keith attended country school through the 8th grade, and graduated from Stella High School in 1950. He continued farming with his father after graduating. On May 24, 1953, Keith was united in marriage to Joan VanDeventer at the Stella Community Church. Their first home was south of Nemaha, Nebraska, and in 1961 the couple moved to the home place near Stella. Keith and Joan were blessed with three children: Pamela, David, and Lisa. Keith entered the U.S. Army on December 10, 1953. He served as a military policeman during his time with the Army. Keith received his honorable discharge on December 9, 1955, and returned home to farm. A lifelong farmer, Keith took pride in tending to his land and growing crops. After selling his operation in 2008 for health reasons, he continued to work for local farmer Bob Beckett. Keith was a member of the Stella Community Church, the Stella Saddle Club, American Legion Post #23 in Auburn, and the Masonic Lodge in Stella and then Pawnee City. When he wasn’t busy on the farm, Keith enjoyed riding horses, square dancing, and woodworking. As his health continued to decline, Keith became a resident of Good Samaritan Society-Auburn in January of 2017. In May he moved to Homestead Rehabilitation and Care Center in Lincoln, Nebraska. It was there he passed away, with family around him, on Thursday, June 1, 2017, at the age of 84 years, 5 months, and 2 days. In addition to his parents, Keith was preceded in death by an infant sister Bette Jane and a brother Hobart. Keith is survived by his wife Joan of Stella; children and spouses Pamela and Vern Mayfield of Highland Village, TX; David and Marie Wheeler of Riverside, AL; Lisa and Gary Juilfs of Lincoln; grandchildren and spouses Eric Mayfield, Jason and Jamie Mayfield, Nikki and Ricky Morton, Joshua Wheeler and friend Haley Higginbotham, Amy and Scott Boswell; great-grandchildren Landon and Logan Davis, Ethan Savage, Hunter Bannister, Jackson Mayfield, Garrett Boswell; sister Mary Helen Behrends of Stella; brother Dick Wheeler of Hamburg, IA; many other relatives and many friends. A funeral service will be Monday, June 5, 10:30 a.m. at the Stella Community Church. Burial will follow in Bedford Cemetery near Howe, with graveside military honors provided by American Legion Post #23 of Auburn and the Nebraska National Guard Honors Detail. Visitation will be at the funeral home Sunday noon to 8:00 p.m., with family greeting friends 2:00 to 4:00. Memorials are suggested to Stella Community Church, Bedford (Howe) Cemetery, or Stella Volunteer Fire Department.

Keith Edward Wheeler, one of five children of Richard and Helen (Andrew) Wheeler, was born December 30, 1932, in Auburn, Nebraska. Keith attended country school through the 8th grade, and graduated from Stella High School in 1950. He continued... View Obituary & Service Information

The family of Keith E. "Whiz" Wheeler created this Life Tributes page to make it easy to share your memories.

Keith Edward Wheeler, one of five children of Richard and Helen...

Send flowers to the Wheeler family.