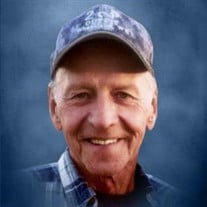 Kenneth Glen Teten, one of eight children of Carl and Loretta (Grotrian) Teten, was born November 6, 1950 in Nebraska City, Nebraska. He attended country school for two years, and finished his schooling in Talmage and Cook, where he was a 1969 graduate of Nemaha Valley High School. On April 27, 1969 Ken was married to Janice Neemann in Talmage. They made their first home in Talmage, and moved to Auburn, Nebraska in September of 1972. They were blessed with two sons, Russ and Rod. After high school Ken worked at the Farmers’ Co-op and Elevator in Talmage. He started in the insurance business in 1972. In 1983 he and Jim Oestmann purchased the Don Kampe Agency in Auburn and renamed it Auburn Agency. Ken was in the insurance business for 40 years before retiring in January of 2011. In December of that year Ken was diagnosed with cancer. Ken was always involved in the community in many ways. He was a member of Sons of the American Legion Post #23, Auburn Eagles, and the Auburn J.C.’s. He was a long-time member of the Auburn Country Club. Ken also enjoyed his trips to the casino, but of all his interests family was the most important to him, especially golfing and any other activities with the grandkids. A battle with cancer took its toll on Ken in his last few years, but he was stubborn enough not to give in easily. With Jan and other family and friends at his side, he fought to keep his life as normal as possible for 3 ½ years. With family at his side, Ken passed away at his home in Auburn on Thursday, June 4, 2015, having reached the age of 64 years, 6 months, and 29 days. In addition to his parents, Ken was preceded in death by his brothers Keith and Tony, brother-in-law Ken Dunn, and mother-in-law Avis Neemann. Those left to remember Ken and his winning way include his wife Jan; sons Russ and wife Glenda of Lincoln, Rod and wife Lecia of Malcolm; grandchildren Daniel, Lily, Morgan, McKenzie, Marion, and Miles; father-in-law Merlin and wife Phyllis Neeman of Gibbon; brother Dennis Teten and Patty of Eagle Rock, MO; sisters and brothers-in-law Elaine and Steve Hofker of Syracuse, Bern and Gary Spurlock of Percival, IA, Judy and Brad Bemberger of Watson, MO, Rita Dunn of Gillette, WY; sisters-in law Kathy Teten of Cody, WY, Sue and husband Roger Rice of Nebraska City; brothers-in-law Steve and wife Jolene Neemann of Beaver Lake, Mike and wife Judy Neemann of Lorton; many other relatives and many, many friends. A memorial service will be Tuesday, June 9, 11:00 a.m. at Hemmingsen Funeral Home in Auburn, with overflow seating and live feed at Arbor Manor. Visitation will be at the funeral home Monday 9:00 a.m. to 8:00 p.m., with family greeting friends 6:00 to 8:00. Memorials are suggested to family choice. The service will be available via live stream here: https://livestream.com/accounts/13846112/events/4107605

Kenneth Glen Teten, one of eight children of Carl and Loretta (Grotrian) Teten, was born November 6, 1950 in Nebraska City, Nebraska. He attended country school for two years, and finished his schooling in Talmage and Cook, where he was... View Obituary & Service Information

The family of Ken Teten created this Life Tributes page to make it easy to share your memories.

Kenneth Glen Teten, one of eight children of Carl and Loretta...

Send flowers to the Teten family.