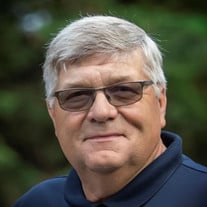 Kenneth Walter Heidzig, one of three sons of Walter and Henrietta (Oestmann) Heidzig, was born February 14, 1955, in Auburn, Nebraska. He was baptized and confirmed at the St. Paul Lutheran Church (Hickory Grove). Kenneth attended Hickory Grove country school from kindergarten to fourth grade, while his family lived on the Oestmann home place of rural Johnson. When his parents moved to their farm south of Auburn, he attended Howe District 39 school through the 8th grade. He then attended school in Auburn, graduating from Auburn High School in 1973. Following high school graduation, he returned to the Heidzig family farm to be a fourth-generation farmer. Kenneth spent the next 45 years of his life devoted to God, family, and agriculture. Throughout his years of farming, he raised various crops and livestock, with cattle being his favorite. On July 17, 1976, Kenneth was united in marriage to Debora E. Rippe at St. Paul Lutheran Church in Auburn. Kenneth and Debora shared the belief of building a strong faith-based family and were blessed with two daughters Heather and Sarah. From the start of their marriage, Ken and Deb always saw themselves as a team. They worked side-by-side operating their farm business throughout their whole marriage, raising their daughters and landscaping their homestead. He helped his two daughters build their life skills through various 4-H projects. The family had many adventures throughout the years, such as countless farming accidents, church activities, 4-H adventures, and exciting vacations. As his family grew, Ken included his sons-in-law in family adventures, such as moving cattle, hunting, and farm projects. When Ken became a grandpa, he loved his grandchildren so much, that all work stopped on the farm to enjoy time with Caleb, Grace, Lucina, and family. Kenneth was also a loving brother and was admired by his two younger brothers. He also served his community by serving on the Auburn Rural Fire Board for the past 35 years and several times on church council. On October 1, 2020, Kenneth passed away at CHI Health Heart in Lincoln, surrounded by his wife and two daughters, having reached the age of 65 years, 7 months, and 17 days. He was proceeded in death by his parents, and parents-in-law Herschel and Edus (Fintel) Rippe. Kenneth’s entire life was centered around Christ, even through ups and downs. His unyielding faith was the cornerstone of his life and family. His strong faith guided his family to grow their faith throughout their lives, which is something that they will be eternally grateful for. Those left to mourn his passing include his wife of 44 years, Debora E. (Rippe) Heidzig; daughters and sons-in-law Heather and Alex Ball of Dearborn, MO, Sarah Heidzig-Kraeger and Bruce Kraeger of Plattsmouth; three loving grandchildren Lucina Ball, Caleb and Grace Kraeger; brothers Thomas (Kay) Heidzig of Johnson, Ronald (Cathy) Heidzig of Loveland, CO; sister-in-law Virgene (Larry) Rasmussen of Highlands Ranch, CO; brothers-in-law Mark (Barb) Rippe of Auburn, Daniel (Linda) Rippe of Auburn; other relatives and friends. A memorial service was held Tuesday, October 6, 2020, at Thanksgiving Lutheran Church in Bellevue, officiated by Rev. David Witkop. Serving as honorary bearers were Larry Holtzman, Dennis Volkman, Dennis Bantz, Mark DeBuhr, Kevin Schlange, and Mark Patterson. Burial followed in Sheridan Cemetery at Auburn. Services were entrusted to Hemmingsen Funeral Home of Auburn

The family of Kenneth W. Heidzig created this Life Tributes page to make it easy to share your memories.

Kenneth Walter Heidzig, one of three sons of Walter and Henrietta...

Send flowers to the Heidzig family.