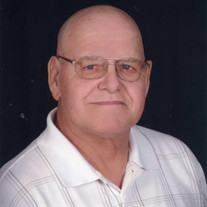 Kenneth Joseph Hug, one of four children of Joseph A. and Anna M. (Weisbrook) Hug, was born March 11, 1939 in Auburn, Nebraska. He was baptized March 19, 1939 at St. Joseph Catholic Church in Auburn, took his first communion June 9, 1940, and was confirmed October 10, 1950. Ken attended school in Auburn, graduating from Auburn High School in 1957. He served in the Nebraska National Guard for 4 years after high school, leaving the Guard after being injured in an automobile accident. On June 19, 1965, Ken was united in marriage to Marguerite Harris of Auburn. They had a son, Matthew Charles. The couple later divorced. On December 18, 1982 Ken was united in marriage to Linda L. Schneider at Zion Lutheran Church near Johnson, Nebraska. Their family now included a son Matthew Charles and a daughter Ranae D. Ken worked for 27 years at WoodCarv Manufacturing, starting on the assembly line and becoming an inspector. He went to work at Auburn Consolidated Industries for 4 years before retiring. In addition to his church membership, Ken also belonged to the Auburn Eagles Club. He very much enjoyed detailing cars, going to classic car shows, tinkering in his garage, and fishing. Ken loved his family and watching his children and grandchildren in all of their activities. Ken was admitted to Bryan West Medical Center in Lincoln, Nebraska in late March of 2020. He passed away there on Wednesday, April 1, 2020 at the age of 81 years and 21 days. His parents and sister Evelyn Myers preceded him in death. Ken is remembered with love by his wife Linda of Auburn; son and daughter-in-law Matthew and Traci Hug of Auburn; daughter Ranae Hug of Omaha; grandchildren Blaise, Haevyn, Maclaine, Tate, and Charles; brother and sister-in-law Clarence “Butch” and Caroline Hug of Lincoln; sister Elizabeth Pohlopeck of Crestview, FL; other relatives and friends. Memorials are suggested in lieu of flowers to family choice.

The family of Kenneth J. Hug created this Life Tributes page to make it easy to share your memories.

Kenneth Joseph Hug, one of four children of Joseph A. and Anna...

Send flowers to the Hug family.