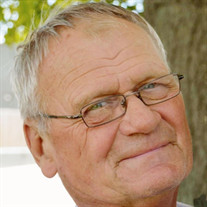 Kenneth “Kenny” Lee Goering was born in Tecumseh on June 12, 1945, to Alvin and Esther (Bohling) Goering. The youngest of four children and only son born to the Goering family, he grew up on their family farm southwest of Brock and graduated from Brock High School in 1964. Shortly after graduation, Kenny began working for Campbell Soup Company in Tecumseh. It was during his free time cruising the streets of Tecumseh that a young lady on a little blue bicycle, Judy Phillips, caught his eye and together they began writing their love story. They were married July 9, 1966, and settled down in Auburn where they welcomed two sons, Randy and Tim. Throughout his life, Kenny worked several types of jobs to support his family, but he was most in his element when swinging a hammer. There wasn’t a project too big or a job too challenging when he was around. In 1986, he stepped out on his own as Goering Construction and spent the next 27 years completing improvement projects for residents and businesses throughout southeast Nebraska. His natural ability in carpentry and construction served the community well and will live on through his two sons who both pursued careers in the industry – one in fine woodworking and the other in architecture. Following his career in construction, Kenny spent his final working years performing maintenance at Peru State College where he enjoyed caring for the campus grounds. In his spare time, he tended his garden in Brock, enjoyed leisure time relaxing on the front porch, and stayed active in the Peru Masonic Lodge of which he had been a member since 1995. Kenny was a fixer who listened more than he talked, worked more than he rested, and never met a stranger. His friendly and helpful disposition allowed him to make friends just about everywhere he went, and it wasn’t unusual to find him standing somewhere listening to the stories of a new acquaintance as if they had been lifelong friends. He had a way of making people feel important and always took the time to do just that with his unforgettable grin that will live on in the hearts of all those he loved. Kenny passed away at home on March 11, 2022, after a long and courageous battle with cancer during which he was faithfully and lovingly cared for by his beloved Judy. He was preceded in death by his parents and sisters, Marlene (Boyd) Wakelin and Joyce (Dale) Stukenholtz. He is survived by his loving wife of 55 years, Judy; son Randy and partner, Paula Ross, of Grand Junction, CO; son Tim and wife, Rachelle, of Marietta, GA; grandchildren Amber, Newt, Michaela, Alex, Elizabeth, Josiah, Rebekah, Riley and Addyson; sister, Carol (Gary) Baker of Lee’s Summit, MO; and many extended family members, loving neighbors, and lifelong friends. A graveside service will be held on Saturday, March 19th, 2:00 p.m.at Lafayette Cemetery near Brock. Friends and family are welcome to the service and at the Brock Fire Station for a time of fellowship following the service.

Kenneth &#8220;Kenny&#8221; Lee Goering was born in Tecumseh on June 12, 1945, to Alvin and Esther (Bohling) Goering. The youngest of four children and only son born to the Goering family, he grew up on their family farm southwest of Brock and... View Obituary & Service Information

The family of Kenneth "Kenny" Lee Goering created this Life Tributes page to make it easy to share your memories.

Kenneth “Kenny” Lee Goering was born in Tecumseh on June 12,...

Send flowers to the Goering family.