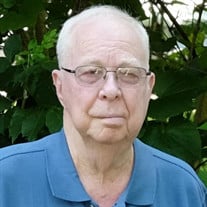 Kenneth Allen McCormick was born December 30, 1929, at Clark, South Dakota, the son of Louisa Jane (Guy) and Harry Anthony McCormick. He was the last of three children. Marcheta Jean (Graciano) was born in 1925 and Rose Marie (Marino) was born in 1927. Because of the stock market crash and the start of the Great Depression, his father’s job as a printer was eliminated and the family was forced to return to the home newspaper in Wynot, NE (where Harry’s family still worked) some 13 days after he was born. In 1935 the family moved to Murray, IA where they published a weekly newspaper. In 1942, following the outbreak of World War II, his father began a series of moves working as a printer at various newspapers in the Midwest, including Rushville, Il, Avoca, IA, and Ida Grove, IA. It was at Ida Grove that Kenneth graduated from high school and then went on to Simpson College at Indianola, IA for one year before transferring to the University of Nebraska. He graduated in January of 1951 with a Bachelor of Arts degree and a certification in journalism. Following a temporary job at the Custer County Chief in Broken Bow, NE as a news editor, he was drafted into the U.S. Army in October of 1951. He was sent to Scofield Barracks near Honolulu, HI, for basic training and then accepted into Officer Candidate School at Ft. Still, OK where he graduated as an artillery second lieutenant. His first duty station as an officer was at Camp Atterbury, IN before being sent to Korea, arriving in May of 1953. The need for artillery officers had diminished considerably since the peace talks were underway so he was assigned to Eighth Army headquarters in Seoul as chief of the news division of the public information office. Because of the cessation of hostilities, the government decided to allow early discharges. This resulted in a year less time than he had signed up for and he left the army in October of 1953. After discharge, Kenneth went to work as news editor of the Wahoo Newspaper in Wahoo, NE. After about a year there, he decided to take advantage of the G.I. bill of rights and enrolled in law school at the University of Nebraska. Near the end of the school year, however, he had an opportunity to take over a newspaper at Stanton, NE, and did so in 1955. After moving to Stanton, he married Janice Lee Owens, whom he had met while at Wahoo. They were married August 21, 1955; to this union three children were born: Sam Allen and Kay Lynn (Gerdes). One child, Douglas, was stillborn. After four and a half years in Stanton, a job opportunity opened up at the Auburn Newspapers. The family moved to that city where Ken served as advertising manager for 27 years. In addition to his ad duties, he also covered sports, the city council, and an occasional feature story. In 1986, Ken and Jan bought Hummel’s Variety Store and ran it until January of 1995 when they retired. During Ken’s newspaper years, he served in several offices, including president, of both the Northeast Nebraska Press Association and the Southeast Nebraska Press Association. He served as president of the Auburn Jaycees and Rotary Club and held a variety of offices, including chairman of the board of the Auburn United Methodist Church, where he was a member for more than 50 years. He was a member of American Legion Post #23 in Auburn. In the early morning hours of Wednesday, July 4, 2018, Ken passed away suddenly at his home in Auburn. He had reached the age of 88 years, 6 months, and 4 days. He was preceded in death by his son Douglas, grandson Aaron Matthew McCormick, and sister Rose Marie Marino. Ken leaves to mourn his wife Janice of Auburn; son and daughter-in-law Sam and Jo McCormick of Lenexa, KS; daughter and son-in-law Kay and Rich Gerdes of Wellsville, KS; grandchildren and spouses Nathan and Janine McCormick, Neil McCormick and Erin Korris, Caitlin and Bret Imgrund, Kirk and Kristin Gerdes, Joel and Nicole Gerdes; great-grandchildren Tanner and Cameron McCormick, Owen, Dane, and Anna Gerdes, Gavin Gerdes; sister Marcheta Graciano of Sierra Vista, AZ; nieces, nephews, other relatives and friends. Memorials are suggested to First United Methodist Church or Auburn Senior Center.

Kenneth Allen McCormick was born December 30, 1929, at Clark, South Dakota, the son of Louisa Jane (Guy) and Harry Anthony McCormick. He was the last of three children. Marcheta Jean (Graciano) was born in 1925 and Rose Marie (Marino) was... View Obituary & Service Information

The family of Kenneth A. McCormick created this Life Tributes page to make it easy to share your memories.

Send flowers to the McCormick family.