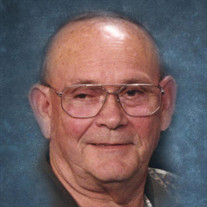 Larry Lee Bratcher, one of 5 children of William Ray and Sarah Roseleigh (Karr) Bratcher, was born October 18, 1937 in Auburn, Nebraska. Larry grew up and attended school in Auburn. At age 17 Larry entered the U.S. Air Force. He served for 5 years as a mechanic before receiving his honorable discharge and returning to Auburn. Since he had entered the military before graduating high school Larry completed his GED upon his return. On December 20, 1960 Larry was united in marriage to Donna Gerdes in Sabetha, Kansas. The made their first home in Nebraska City, Nebraska prior to moving to Omaha. Except for short stays in Arkansas and Topeka, Kansas they were in Omaha until moving back to Auburn in 2000. The couple was blessed with three children: Michael, Steven, and Corrinna. Larry made his living working construction and operating heavy equipment on highway construction. He enjoyed watching sports, especially sporting events that involved his children and grandchildren. Larry was diagnosed with Alzheimer's disease and entered the Good Samaritan Society-Auburn in 2015 as a result of failing health. It was there he passed away on Tuesday, December 8, 2020 at the age of 83 years, 1 month, and 20 days. He was preceded in death by his parents, his daughter Corrinna Munchrath, and his brothers Vol Rayburn and Arnold, John, and Pat Bratcher. Those left to mourn Larry’s passing include his wife Donna of Auburn; sons and daughters-in-law Michael and Julie of Omaha; Steven and Jane of Medford, OR; grandchildren Stephanie Bratcher; Samantha (Bob) Koehler; Daniella, Victoria, and Melanie Bratcher; Caitlynne, Sarah, and Jackson Munchrath; Rikiya and Zane Bratcher; step-grandchildren Aaron, Abe, and Adam Quarrell; great-grandchildren Chloe Koehler and Nyx Bendorf; brother Ronald (Sherry) Bratcher of Omaha; sisters-in-law Janie Bratcher of Gothenburg; Connie Feighner of Auburn; Kathy Gerdes of Royal Oaks, MI; brother-in-law Clinton “Speck” Clark of Auburn; other relatives and friends. A graveside memorial and committal service will be Saturday, April 10, 1:30 p.m. at St. Paul Lutheran Cemetery near Auburn. Memorials are suggested to donor’s choice or family choice.

The family of Larry Bratcher created this Life Tributes page to make it easy to share your memories.

Larry Lee Bratcher, one of 5 children of William Ray and Sarah...

Send flowers to the Bratcher family.