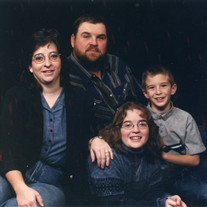 In Loving Memory of Larry R. Morris, Jr., son of Larry R. Morris, Sr. and Barbara Morris. Born December 14, 1964 in Auburn Nebraska, he attended Peru Elementary School up until 6th grade and graduated from Auburn Public High School. On November 22, 1986 Larry was united in marriage to Debra Willard of Auburn. Larry and Debra started their lives in Peru, Nebraska. It was then they were blessed with two wonderful children Jessica and Jacob. In later years the family built their dream home in Nemaha County and they were blessed with four grandchildren. Larry enjoyed working, putting it, second only to his family. Larry experienced working with various farmers in Nemaha County, Hall Motors in Humboldt, Peru Saw Mill, and Meat Packing Plant in Rock Port. With love for his family his desire to make a better life for his family grew stronger. Larry worked two jobs with the Nemaha County Roads and Jim Winkelman. For many years before starting his own business known as Morris Field Tiling, Larry’s desire was to have his son continue the business. His son is proud to honor his dad’s wishes. Larry took pride in everything he had achieved, and put everyone in front of his own needs. As he found time in his life he enjoyed hunting, fishing, bow hunting, trapping, and restoring old cars and tractors to running condition. Another love in Larry’s life were his cattle that he raised and shared with his grandchildren and family. After being diagnosed in September 2013 with Leukemia, Larry with the help of family and friends battled hard against the disease. Many hospital visits were a part of his fight, but he was able to return to his home on Friday June 20, 2014. It was there later that night, Larry passed away with his family around him. He had reached the age of 49 years, 6 months and 6 days. He was preceded in death by his daughter Jessica (Morris) Lyons, grandparents Arthur and Leota Morris, grandmother- in-law Eva Bell Willard, sister-in-law Donna and her husband Mike and their daughter Amber. Larry is survived by his wife Debra of Auburn; son Jacob and daughter-in-law AhLeah Morris of Auburn and granddaughters Lillian, Chloe, and Kaylee; son-in-law John J Lyons Sr. and grandson John J Lyons Jr. of Lincoln; parents Larry and Barbara Morris Sr of Peru; sister Cheri, brother-in-law Leslie and nephew Robert Dean of Peru; parents-in-law Ron and Kay Willard of Brock; brother-in-law Bill and wife Donna Ashenfelter of Wichita, KS; sister-in-law Angela Wredt of Auburn and her daughters Sasha and Brandi; brother-in-law Lonnie Willard, wife Shannon, and their sons Robert and Vincent of Omaha, NE; two other nephews Toni and Alex Smith of Texas; many aunts, uncles, cousins and friends.

The family of Larry R. Morris Jr. created this Life Tributes page to make it easy to share your memories.

Send flowers to the Morris family.