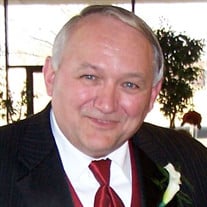 Larry Gene Peterson, one of five children of Donald Everett and Perle Viola (Hunter) Peterson, was born December 16, 1947 on a farm near Corning, Iowa. He attended Grove #3 country school near his home until his family moved. He finished grade school and graduated from high school at Prescott, Iowa. As a young man he worked with race horses on an Iowa farm, and even rode as a jockey as part of his job. After two years at Southwest Iowa Community College, Larry attended Peru State College in Peru, Nebraska, where he earned his Bachelor’s Degree in Education. Later in life he received his Master’s in Education at Northwest Missouri State University, and continued to pick up courses that interested him. On August 21, 1971 Larry was united in marriage to Dianne Dietrich at Sts. Peter and Paul Catholic Church in Hamburg, New York. They made their home in Auburn, Nebraska, and would be blessed with two children, Nicole and Scott. In August of 1972 Larry took a position in the Industrial Technology Department at Auburn Public Schools. He taught there for over 30 years, retiring in 2003 after impacting a multitude of young minds and hands. Larry started the Industrial Technology Club in Auburn, received both the State of Nebraska and National Industrial Education Teacher of the Year Awards. He received a plaque from Auburn School District #29 for his many contributions and years of service to the students. After his retirement he opened “Pete’s Shop” in Auburn and worked on projects for many people in the community. A member of St. Joseph Catholic Church in Auburn throughout his time there, Pete also belonged to various teacher’s organizations, including the Industrial Technology Association. Larry played baseball from the time he was a young boy, and enjoyed playing other sports as he grew. This love for sports carried over to coaching his children and his students in their athletic endeavors. He continued his sporting activities on the golf course and at the bowling alley. Always one to enjoy the company of others, Pete loved coffee time with his buddies and participating in his Fantasy Football group. A major accomplishment in his life was being a winner on the Price Is Right! Larry passed away suddenly at his home in Auburn on Tuesday, December 2, 2014, just 14 days before his 67th birthday. His parents, brother Eddie, and brothers-in-law Leo Dietrich, Dennis Dietrich, Richard Castillo, James Wyman, and Robert Bradley preceded him in death. Those left to remember Pete’s winning ways include his wife Dianne of Auburn; daughter and son-in-law Nikki and Aaron McCann of Kansas City, MO; son and daughter-in-law Scott and Anne Peterson of Leawood, KS; grandchildren Megan, Nora, Abi, and Lilly McCann and Addison and Elliott Peterson; sisters and brothers-in-law Janice and Bob Cooper of Council Bluffs, IA; Judy Castillo of Council Bluffs; Esta Marie and Bruce DuVal of Tabor, IA; sisters-in-law Marilyn Wyman of Evans, NY; Gretchen Bradley of Point Breeze, NY; Dorothea and Richard Fletcher of Clymer, NY; Linda Dietrich of Amherst, NY; Connie Dietrich of Cassville, MO; other relatives and many friends. A funeral mass was celebrated Friday, December 5, 2014 at St. Joseph Catholic Church in Auburn, celebrated by Father Karl Millis. Readers were Anne Peterson and Suzanne Moody, and Jeff Falter presented a eulogy. Special music was provided by the St. Joseph Parish Choir. Casket bearers were Tom Stanley, Terry VanGundy, Bruce DuVal, Donny DuVal, Mike Vinson, Steve Cole, and Jim Oestmann. Honorary bearers were Rob Evans, Dana Farris, Jim Kearney, Allan Moody, Bob Kechely, Mark Oliver, Kristin Kudrna, Julie Lambert, Carrie Jeanneret, Amy Kroll, Randall Smith, and all those who touched Larry’s life. Larry’s body was cremated following the mass.

Larry Gene Peterson, one of five children of Donald Everett and Perle Viola (Hunter) Peterson, was born December 16, 1947 on a farm near Corning, Iowa. He attended Grove #3 country school near his home until his family moved. He finished... View Obituary & Service Information

The family of Larry G. Peterson created this Life Tributes page to make it easy to share your memories.

Larry Gene Peterson, one of five children of Donald Everett and...

Send flowers to the Peterson family.