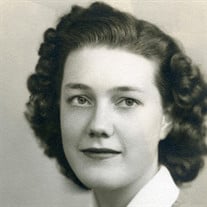 Ruth LaVerne Teten, one of two children of Herman and Alice (Erisman) Teten, was born May 20, 1929, on the farmhome of her grandparents LeRoy and Rosella Erisman southeast of Auburn. She attended grade school in the Howe area and graduated from Auburn High School in 1945. On August 7, 1949, LaVerne was united in marriage to Gerald Glade Goings at the Bethel Community Church east of Auburn. LaVerne and Glade met in the hay field as neighbors, and knew that they would enjoy a lifetime of farming together. The couple was blessed with two daughters Rosalee and Mary Ann. After graduating, LaVerne worked at Darling Transfer in the office and held several other office jobs throughout her married life, including the ASC office and for A.B. Ritchie. LaVerne enjoyed knitting, putting together puzzles, and attending the sporting and 4-H events of her grandkids and great-grandkids. She was a member of the Auburn Berean Church, teaching Sunday School for many years, and was involved with the Ladies’ groups and County Extension Clubs. Various health issues challenged LaVerne this past year. She was recently admitted to the Good Samaritan Society in Auburn, and it is there that she passed away on Sunday, November 12, 2017, having reached the age of 88 years, 5 months, and 23 days. Her parents preceded her in death. She is survived by her husband Glade of Auburn; brother Robert and wife Barbara Teten of Auburn; daughters and sons-in-law Rosalee and Glen Guhde of Brock, Mary Ann and Jim Biere of Auburn; grandchildren and their families: Shawn and wife Melanie, Scarlett, Rex, Juliet Guhde; Shelly and husband Scott, Layla, Beau Simpson; Steven and wife Haneen, Ava Guhde; LeeAnn and husband Richard, Tyler, Kyson, Jackson Warner; Jennifer and husband Nick, Esten, Emma, Eva Hyde; Brian Biere; brother-in-law Harley and wife Francis Goings of Tecumseh; many nieces, nephews, other relatives and friends. Memorials are suggested to the Auburn Rescue Squad or Auburn Rural Fire Department.

Ruth LaVerne Teten, one of two children of Herman and Alice (Erisman) Teten, was born May 20, 1929, on the farmhome of her grandparents LeRoy and Rosella Erisman southeast of Auburn. She attended grade school in the Howe area and graduated... View Obituary & Service Information

The family of LaVerne Goings created this Life Tributes page to make it easy to share your memories.

Ruth LaVerne Teten, one of two children of Herman and Alice (Erisman)...

Send flowers to the Goings family.