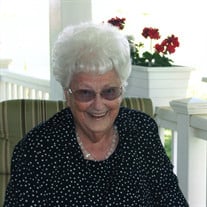 LaVerta Bernice Fass, one of four children of Frederich and Elsie (Rademacher) Fass, was born August 15, 1923 on the family farm southwest of Auburn, Nebraska. She was baptized September 7, 1923, and confirmed November 21, 1937, both by Rev. William Fruehling at Martin Luther Lutheran Church. LaVerta attended rural school near her home through the 8th grade, and then stayed at home to care for her mother. On December 16, 1943, LaVerta was united in marriage to Frederick Bohling at Martin Luther Church. The couple made their home on a farm near Johnson, Nebraska, and were blessed with two daughters, Barbara and Kathy. Frederick passed away on December 20, 1964. On February 2, 1973, LaVerta married Arthur Schultze at St. Paul Lutheran (Hickory Grove) Church near Auburn. LaVerta and Art made their home in Auburn. Arthur died on October 12, 2001, and LaVerta continued to live in their home for many years, until moving to an apartment in Auburn. LaVerta worked for many years at the Danny Dare Sewing Factory in Auburn. She also sewed for her family and others out of her home. She made many wedding and bridesmaid dresses, as well as other items for people in the community. LaVerta retired from the sewing factory in 1973, but continued sewing as long as she was able. In 1973, LaVerta transferred her church membership to Trinity Lutheran Church in Auburn. She was active in all three of the churches to which she belonged. At Trinity she served as head of the funeral lunch committee for many years. LaVerta was active in her community as well. She belonged to the Johnson Chamber of Commerce and American Legion Auxiliary, delivered Meals on Wheels in Auburn, and had been a 4-H Leader. Putting her skills as a seamstress to work, LaVerta made and donated hundreds of quilts to Lutheran World Relief and the Orphan Grain Train. She sewed bibs and shower robes for use in care centers in Auburn and Alva, Oklahoma. LaVerta also made many, many Care Bears for children. After a fall, LaVerta was admitted to the Nemaha County Hospital in Auburn. She passed away there later that night, Saturday, September 9, 2017, 25 days after her 94th birthday. In addition to her parents and her husbands, LaVerta was preceded in death by her grandson Brandon Villafane, sister Deloma Bohling, and brothers Leland and Orval Fass. LaVerta is survived by her daughters Barbara and husband Maurice Oestmann of Auburn, Kathy and husband Bert Villafane of Beatrice; grandchildren and spouses Darren (Amy) Oestmann, Sherri (Jeff) Armstrong, Jennifer Oestmann, Crystal Oestmann, Justin (Kelly) Villafane; great-grandchildren Julia and Emily Oestmann, Douglas and Theodore Villafane; other relatives and many friends. Funeral service will be Friday, September 15, 2017, 10:30 a.m., at Trinity Lutheran Church in Auburn. Burial will be at 1:00 p.m. in the St. Paul Lutheran (Hickory Grove) Cemetery near Auburn. Visitation will be at the funeral home, Thursday from 9:00 a.m. to 8:00 p.m. with family greeting friends from 6:00 to 8:00. Memorials are suggested to the Orphan Grain Train.

LaVerta Bernice Fass, one of four children of Frederich and Elsie (Rademacher) Fass, was born August 15, 1923 on the family farm southwest of Auburn, Nebraska. She was baptized September 7, 1923, and confirmed November 21, 1937, both by... View Obituary & Service Information

The family of LaVerta Schultze created this Life Tributes page to make it easy to share your memories.

LaVerta Bernice Fass, one of four children of Frederich and Elsie...

Send flowers to the Schultze family.