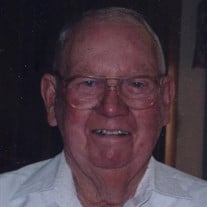 Leland Leroy Blankenship, one of eight children of Charlie and Erma (Allgood) Blankenship, was born January 29, 1926 in Peru, Nebraska. He attended school in the Peru public school system. In 1943 Leland was married to Norma Barton in Peru. A son, Leland, Jr., and daughter, Linda, were born to this union. The couple would later divorce. Leland served in the U.S. Merchant Marine, and then the U.S. Army. After his honorable discharge he returned to Nemaha County in Nebraska. On September 4, 1973 Leland was united in marriage to Mary (Ballue) Stephens in the Christian Church in Auburn, Nebraska. Mary’s daughter Julie was welcomed as a part of Leland’s family. Leland drove a truck for over 30 years for Darling Transfer in Auburn. He retired in the 1970’s. He enjoyed horses, and was a horse trader and seller throughout his life. Leland belonged to the Nemaha County Saddle Club and the Johnson American Legion Post #330. He loved to play with his grandkids and follow them in their activities. Leland passed away on Thursday, March 26, 2015 at St. Elizabeth Medical Center in Lincoln, Nebraska, having reached the age of 89 years, 1 month, and 25 days. His wife Mary, brothers Dale and Lester, and sisters Delia Blankenship, Lena Bennett, and Neva Weisbrook preceded him in death. He is survived by his son Leland L. “Butch” Blankenship, Jr. of Onawa, IA; daughters Linda Huey of Omaha; Julie and husband Gary Thompson of Columbia, MO; 10 grandchildren; many great-grandchildren; brothers Charlie of Auburn; Carroll of Newton, IA; friend Nikki Colglazierqli of Auburn; other relatives and friends. A memorial service will be Monday, March 30, 1:00 p.m. at Hemmingsen Funeral Home in Auburn. Inurnment of ashes, with military honors, will follow at Mt. Vernon Cemetery at Peru. Visitation will be at the funeral home Sunday noon to 8:00 p.m., with family greeting friends 3:00 to 5:00. Memorials are suggested to Nemaha County Saddle Club.

Leland Leroy Blankenship, one of eight children of Charlie and Erma (Allgood) Blankenship, was born January 29, 1926 in Peru, Nebraska. He attended school in the Peru public school system. In 1943 Leland was married to Norma Barton in... View Obituary & Service Information

The family of Leland L. Blankenship created this Life Tributes page to make it easy to share your memories.

Leland Leroy Blankenship, one of eight children of Charlie and...

Send flowers to the Blankenship family.