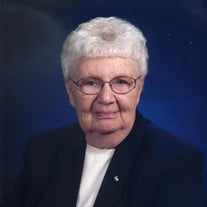 Gretta Leona (Elenga) Grube was born to Henry and Frances (Schultz) Elenga August 29, 1929 in Tecumseh, Nebraska. She was baptized and confirmed in St. Andrew’s Catholic Church. Leona attended school in Tecumseh and graduated with the class of 1947. After graduation, Leona was employed at the city hall in Tecumseh with the light and water department. On November 4, 1950, Leona was united in marriage to Leroy Grube at St. Andrew’s Catholic Church. To this union three children were born: Tom, Pam, and Steve. Leona and Leroy lived on their farm near Johnson for 52 years, before retiring in 2004 and moving to Tecumseh. They were both involved in farm life. Leona was a member of Zion Lutheran Church after marriage. Her grandchildren and great-grandchildren were her pride and joy, and she loved getting to watch them in their activities and having them and other family come to visit. Leona enjoyed cooking for family, quilting get-togethers, fishing and traveling with Leroy. After Leroy’s passing in 2008 after 58 years of marriage, Leona continued to live in Tecumseh for several years. She moved to Savannah Pines in Lincoln, Nebraska and enjoyed residing there and participating in activities of the community. On January 28, 2019 Leona underwent surgery at Bryan East Medical Center in Lincoln. After complications, and with family by her side, she passed away that morning at the age of 89 years, 4 months, and 30 days. In addition to her husband Leroy and her parents, Leona was preceded in death by her son Tom, sisters- and brothers-in-law Elda and Bill Rhineshart, Della and Dave Vaughn, and Eugene and Betty Grube. Those left to cherish all her love include her daughter and son-in-law Pam and Dale Ottemann of Johnson; son and daughter-in-law Steve and Kelli Grube of Lincoln; daughter-in-law Deb Grube of Hartington; grandchildren and spouses Nathan and Jenny Grube, Nikki Grube, Chad and Tonya Ottemann, Jesse and Stacy Ottemann, Mackenzie and Jimmy Motz, Adam and Amber Grube, Ashley and Eric Mitchell; great-grandchildren Megan, Emma, Olivia Grube; Broc, Bailey, Azalee Elliott, Nic Grube; Dallas, Zach, Mason, Cade, Jack Ottemann; Jayce, Maguire Motz; Edyn Grube; Elliot Mitchell and 2 on the way; brother and sister-in-law John and Linda Elenga of Omaha; many other relatives and friends. A funeral service was Saturday, February 2, 2019 at Zion Lutheran Church north of Johnson. Rev. John Kisling officiated, and Susie Hogrefe was organist. Songs of comfort included a solo by Jesse Ottemann and a duet by Bruce and Kathy Sohnholz. Casket bearers were Nathan Grube, Chad Ottemann, Jesse Ottemann, Jimmy Motz, Adam Grube, and Eric Mitchell. Honorary bearers were Nikki Grube, Mackenzie Motz, Ashley Mitchell, Tonya Ottemann, Stacy Otteman, Jenny Grube, and Amber Grube. Burial was in the church cemetery.

The family of Leona Grube created this Life Tributes page to make it easy to share your memories.

Send flowers to the Grube family.