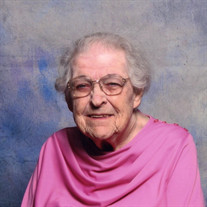 LeRee Nemaha Clarke was born April 13, 1914 to John Eston and Florence Lee Clarke on a farm near Brock, Nebraska, the second of four children. LeRee attended country school at Old Glenrock District 12. She attended Auburn High School and graduated from there as Salutatorian in 1931. She attended Stephen’s College for Girls in Columbia, Missouri that fall. She then attended Peru State College in 1933 and 1934. In the late 1930’s, she took a course in Professional Dressmaking and Tailoring and Pattern Making, having found her real talent. She sewed for her mother, her children, herself and other family members. In 1940, LeRee was the census taker for the Glenrock District. On March 19, 1942 LeRee was married to Roy Henderson of rural Hereford, Texas. They lived on a farm in that area until the autumn of 1943 when they moved to Brock, where they spent their life together. They raised four children there. Roy passed away September 3, 1981, and LeRee remained in their home almost 30 more years. LeRee was a member of the Brock Methodist Church for more than 50 years. She spent 10 years as a Primary Class Sunday school teacher, and was an active member of the church’s women’s unit. She was a forty year member of Extension Clubs, and had been a member of the Daughters of the American Revolution for 20 years. She spent two summers in the ‘50’s as a social worker for the Nemaha County Welfare Department. In 1960 she became the Brock news correspondent for the Auburn Newspaper for nearly 10 years. She was a part-time salesperson for 30 years for the Blair Company that offered household products, gifts and greeting cards. LeRee entered Good Samaritan Society-Auburn nursing home on July 3, 2010, and it was there that she passed into Heaven and was safe in Jesus’ arms on September 5, 2015, reaching the age of 101 years, 4 months, and 23 days. She was preceded in death by her husband; her parents; three brothers and their wives; two grandsons: Jonathan Scott Henderson as a toddler and Cpl. Matthew Charles Henderson, USMC in Iraq; and two sons-in-law: Larry Ramold and Jim Bigley. She will be greatly missed by all her family, who loved her and who she loved deeply, especially the young great- and great-great-grandchildren who were so precious to her. Survivors include her children Nancy Ramold of Lubbock, TX; Pastor John and wife Ruth Henderson of Brock; Dr. Owen and wife Julie Henderson of Fort Collins, CO; Judy and husband Harold Ruwe of Fremont; grandchildren Theresa Ramold, Cynda Starnes, Kerri (Dave) Kratz, Michael Henderson, Joann Haddock, Jayne (Scott) Kessler, Cristine Henderson, Jill (Dan) Dunham, James (Lori) Henderson, and Kellie (Ausencio) Ramirez; great-grandchildren Kendra (Kyle) Fredrickson, Kloe Kratz, Capri Sims, Mason Starnes, Jude Kessler, Neve Kessler, Darrien Henderson, Evelynn Henderson, Matthew Henderson, Renae Henderson, Sofia Ramirez, Jonah Ramirez, and Noah Ramirez; great-great-grandson Victor Sims; nieces, nephews, other relatives and many friends. A funeral service will be Friday, September 11, 11:00 a.m. at the Brock United Methodist Church. Burial will follow in Lafayette Cemetery near Brock. Visitation will be at the funeral home Thursday 9:00 a.m. to 8:00 p.m., with family greeting friends 6:00 to 8:00.

The family of LeRee Nemaha Clarke Henderson created this Life Tributes page to make it easy to share your memories.

Send flowers to the Henderson family.