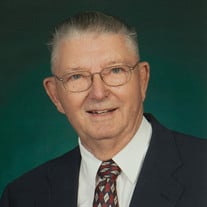 Lester Frank Russell was born June 14, 1927, to Martha Mildred (Argabright) and Clarence Lester Russell, Jr. in a log cabin on the family farm north of the village of Nemaha, Nebraska. Until March, 2013, Lester had lived his entire life in Nemaha County, Nebraska. At that time, Lester moved to Bickford Assisted Living of Marshalltown, Iowa, to be near his daughter and her husband. On July 26, 2016, Lester passed away at the Iowa River Hospice House. Lester grew up on the family farm. He graduated from Nemaha High School in the Class of 1944. After high school, Lester farmed with his dad until 1947. That same year, he continued his education at Peru State College (PSC) in Peru, Nebraska. He majored in Music and Industrial Technology. During his junior year, he served as the high school music instructor at Steinauer, Nebraska. As a senior, Lester taught elementary and high school band and chorus at Johnson, Nebraska. He also supplemented his income by playing trumpet in a dance band with other music majors from the college. Following graduation from PSC in 1951, Lester taught at Brock, Nebraska, for five years, and obtained his Master’s Degree from the University of Minnesota during that same timeframe. Lester married Esther LaVerne Holmes on July 22, 1951. Esther and Lester had grown up as neighbors living on adjacent farms. They started to Kindergarten together, graduating from high school in the same class. Then, they both graduated from college with their Bachelor’s degrees on the same date. One daughter, Martha, was born to this union on February 12, 1956. In 1956, Lester accepted a position as Assistant Professor of Industrial Arts at PSC. Lester received his doctorate from the University of Nebraska-Lincoln in 1967. He remained at PSC for the next 39 years, retiring as the Chairman of the Industrial Arts and Business Divisions and Professor of Industrial Technology and Education. Lester’s life work was his commitment to education. He believed that the power of education would make a better society. He encouraged people to learn and to better themselves. Lester was active in professional, civic, and fraternal organizations. He was the past president of the Peru Kiwanis Club (a club honored for its fund-raising abilities among small Kiwanis Clubs across the country) and that organization named him Citizen of the Year in 2007; President of the Nebraska Council on Industrial arts Teacher Education, Trustee of Eta Chapter Epsilon Pi Tau (an international honorary for industrial education); and was past Master of Auburn Lodge #124 A.F. & A.M. Lester was a life member of the National Education Association, the International Technology Education Association, the National Council of Technology Education, the Nebraska Industrial Technology Education Association, and the Mississippi Valley Industrial Technology Teacher Education Conference. He was a charter member and early director of the Nebraska Association of Aerospace Educators. After his retirement from teaching, he was President of the Peru State College Foundation from 1997 to 2000. Lester was also a driving force in the movement to keep PSC in Peru, when a local group lobbied to move it to a new location in Nebraska City, NE. He spent considerable hours working with local groups, politicians, and the Nebraska State legislature to ensure the College remained at Peru. His work was successful and the college continues to thrive and grow in Peru. Lester and Esther were active in the Auburn Church of Christ after transferring their membership from the Nemaha Christian Church in 1952. Lester served as Chairman of the Board for many years, and held offices of elder and deacon for some time. He taught Bible School for nearly 45 years. Gardening was always a hobby and passion for Lester and Esther. They were well known for their gardens, and the abundant produce they shared with many local people. Even at Bickford, he was able to continue to grow tomatoes – his plants are still growing well in a garden plot at the facility. He was a man of many talents, and will be greatly missed by family and friends. He is preceded in death by his parents, and his wife, Esther, who passed away in December, 2011. He is survived by his daughter, Martha (Ron) Brestel of Marshalltown, IA, sister-in-law’s Twila (Alan) Stiers of Cedar Rapids, IA, Donna (Eldon – now deceased) Wheeler of Tacna, Arizona; nieces and nephews, cousins, and many friends. A memorial service will be Thursday, August 4, 1:00 p.m. at Mitchell Family Funeral Home, 1209 Iowa Avenue West, Marshalltown, IA 50158. Graveside service and burial of ashes will be Friday, October 21, 1:00 p.m. at the Nemaha Cemetery, Nemaha, NE. The family asks that memorials be directed to the Peru State College Foundation in Peru, NE, or to Grimes Farm in Marshalltown, IA.

Lester Frank Russell was born June 14, 1927, to Martha Mildred (Argabright) and Clarence Lester Russell, Jr. in a log cabin on the family farm north of the village of Nemaha, Nebraska. Until March, 2013, Lester had lived his entire life in... View Obituary & Service Information

The family of Lester Russell created this Life Tributes page to make it easy to share your memories.

Send flowers to the Russell family.