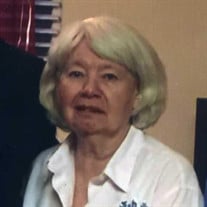 Linda Jean (Pieters) Bernt, one of 10 children of Edward and Joan (Mahoney) Pieters, was born April 28, 1953, in Columbus, Nebraska. Linda grew up and attended school in Columbus, graduating with the class of 1971 from Columbus High School. On March 29, 1974, Linda was united in marriage to Gustaf Bernt. The couple would be blessed with two sons, Michael and David. Gustaf served in the United States Army, and Linda was a devoted military wife, raising their two sons and running the household. In her free time, Linda enjoyed playing cards, Bingo, going to casinos, and was an avid sports fan, but above all else, Linda loved spending time with her family. After the loss of her husband Gus on July 1, 2021, and a decline in health, Linda moved to the Good Samaritan Society in Auburn, Nebraska. It was there that Linda ended her long battle with Multiple Sclerosis and diabetes on February 15, 2022, having reached the age of 68 years, 9 months, and 18 days. Along with her husband of 47 years, Linda was preceded in death by her parents, sisters Kathy Zegers and Shirley Bonk, and brother Dan Pieters. Those left to mourn her passing include her sons and daughters-in-law Michael and Sabrina Bernt of Enterprise, AL, David and Jamie Bernt of North Little Rock, AR; grandchildren Destiny and Landon of Enterprise, AL; siblings Carolyn Jorgensen of Auburn, Edward (Renae) Pieters of Newtown Square, PA, Mary (Terry) Hollmann of Columbus, Vicky Jones of Norfolk, Dave (Beth) Pieters of Auburn, Theresa (John) Lindinger of Auburn; many nieces, nephews, other relatives and friends. A funeral service will be Friday, February 18, 2022, 11:00 a.m. at Hemmingsen Funeral Home in Auburn. Family will greet friends one hour prior to service. Burial of ashes will take place at a later date in Sheridan West Cemetery at Auburn. View Linda's funeral via Livestream at: https://livestream.com/accounts/13846112/events/10179975 Memorials are suggested in lieu of flowers to MS Society Foundation.

Linda Jean (Pieters) Bernt, one of 10 children of Edward and Joan (Mahoney) Pieters, was born April 28, 1953, in Columbus, Nebraska. Linda grew up and attended school in Columbus, graduating with the class of 1971 from Columbus High School.... View Obituary & Service Information

The family of Linda Jean (Pieters) Bernt created this Life Tributes page to make it easy to share your memories.

Linda Jean (Pieters) Bernt, one of 10 children of Edward and...

Send flowers to the Bernt family.