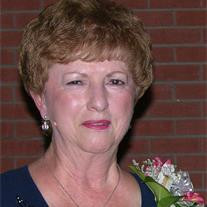 Linda Sue Knox, daughter of Robert A. and Audre L. (Hunter) Knox, was born April 29, 1938 in Freeport, Illinois. As a young girl, Linda?s family moved to Brownville, Nebraska and she started her schooling there for two years. Linda then attended Auburn Public Schools and graduated from Auburn High School. She received an Associate?s Degree from Lincoln School of Commerce in Lincoln, Nebraska. On May 4, 1957 Linda was united in marriage to Ervin ?Curly? Remmers in the Auburn United Methodist Church. They made their home in rural Nemaha County and were blessed with two children, Lonny and Lori. Linda worked for a short time in the office of the Auburn Board of Public Works. She then went to work at Auburn Consolidated Industries, and served as Accounting Manager there for over 20 years. After her retirement from ACI, Linda served as Office Assistant in her daughter?s CPA office in Nebraska City, for five years. She often commented this was the best job she ever had. After Ervin passed away on August 15, 1995, Linda immersed herself in her family, her work, and other interests. On August 26, 2006 she was united in marriage to James L. Oestmann at St. Paul (Hickory Grove) Lutheran Church near Auburn. They made their home in Auburn, and enjoyed spending time together travelling, attending Husker football games, and visiting family and friends. Linda was a member of St. John (Stone) Lutheran Church near Auburn. She was a member of the Relay for Life Hopettes, and served as a volunteer with Nemaha County Lifeline. Linda was involved with the Brownville Concert Series for many years, and a past president of the Auburn Country Club. She enjoyed golfing and bowling, and loved to follow the activities of her grandchildren. While in California visiting her son, Linda suffered health problems that forced her to be hospitalized and then placed in hospice care. She passed away in Upland, California on Saturday, March 31, 2012 at the age of 73 years, 11 months, and 2 days. In addition to her husband Curly, she was preceded in death by her father Robert Knox. Left to celebrate her life are her husband Jim of Auburn; son and daughter-in-law Lonny and Lisa Remmers of Corona, CA; daughter and son-in-law Lori and Kent Gerking of Nebraska City; step-children Anne and husband Bill Fitzgerald of Fremont, NE; Jim and wife JaNay Oestmann of Auburn; grandchildren Cory Gerking and wife Kristen, Kyle Gerking and wife Laura, Danielle Remmers, Amber Remmers and fiance Bryan Dutcher, Jamison Remmers; step-grandchildren Nicholas Craig, Trevor Fitzgerald and wife Bonnie, Abby Fitzgerald, Meleia Oestmann, Alexa Oestmann; great-grandchildren Georgia Frommie and Jack Fitzgerald; mother Audre Blankenship of Auburn; sister Barbara and husband Richard Moore of Auburn; brother-in-law Tom and wife Kay Remmers of Warsaw, MO; sister-in-law Norma Dart of Lincoln; step-brothers Robert and wife Shirley Reed of Kearney, NE; Bob and wife Liz Blankenship of St. Louis, MO; Bill and wife Diane Blankenship of Sioux City, IA; step-sister Betty and husband Sverrir Hauksson of Virginia Beach, VA; other relatives and many friends. Services celebrating Linda?s life will be Monday, April 9, 10:00 a.m. at St. Paul (Hickory Grove) Lutheran Church near Auburn. Burial will follow in St. John (Stone) Lutheran Cemetery. Visitation will be at the funeral home Sunday noon to 8:00 p.m., with family greeting friends 4:00 to 7:00. Memorials are suggested in lieu of flowers.

Linda Sue Knox, daughter of Robert A. and Audre L. (Hunter) Knox, was born April 29, 1938 in Freeport, Illinois. As a young girl, Linda?s family moved to Brownville, Nebraska and she started her schooling there for two years. Linda then attended... View Obituary & Service Information

The family of Linda Remmers Oestmann created this Life Tributes page to make it easy to share your memories.