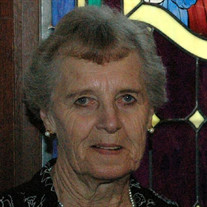 Lola L. (Caspers) Heidemann was born the fifth child of D.J. and Frieda (Antholz) Caspers’ eight children at the farm home near Auburn, Nebraska on January 15, 1930. Lola entered her heavenly home and the loving arms of Jesus on April 17, 2016, having walked with God on her earthly home for 86 years. St. John’s (Stone) Church, Auburn, Nebraska, provided Lola with the beginning years of growing in God’s Word beginning with her baptism in 1930 and continuing with the confirmation of the vows of her faith in the Triune God in 1943. It was also at St. John’s (Stone) Church where Lola married Leland L. Heidemann on September 7, 1949. They were blessed with 63 years of marriage. Lola attended District 72, Happy Valley, through 8th grade, 9th grade at Bratton Union Consolidated School, and then graduated from Auburn High School in 1947. She worked at Darling Transfer until her marriage. Leland and Lola made their home in Pawnee County, near St. Peter’s Lutheran Church. They were blessed with four children, Lanie, Leslie, Lois, and Lavon. She worked with her husband on the family farm. Dairy cows, chickens, gardening, baking and sewing were all parts of her every day life. In 1992, Leland and Lola moved to Tecumseh, Nebraska. At that time she became active in the local Red Cross chapter and served for a time on its board. Many local citizens can remember the baked goods that Lola so loved to make. Lola was very active in the church. She became a member of St. Peter’s Lutheran Church, Elk Creek, Nebraska after her marriage. There she was a choir member and enjoyed her years of teaching Sunday School and VBS. She felt a strong bond with her fellow sisters in Christ as a member of the Dorcas Society and the District LWML. She attended numerous national and international LWML conventions. Lola and Leland enjoyed traveling, visiting with friends, playing cards and foremost, found much happiness being with their children and grandchildren. Lola incurred many health issues in 2011. Upon returning to her own home after eleven months of hospitals and the care home, she made the plans to have her earthly remains donated to help advance education and research at Creighton University. Leland passed away in January 2013. Lola said she never felt alone after that – she knew that God was always with her. She felt such gratitude to family, neighbors and friends who shared their time with her – be it by telephone visits, sharing a ride, home visits and special treats – she appreciated you all. In a continued effort to share the love that God bestows, she spent many happy hours in her final years by writing encouraging notes and cards as well as telephone calls and personal visits to others. She was a prayer warrior and felt it her duty to witness for Christ to others and continued to do so until her final day. Lola’s last eighteen days were spent in hospitals. On April 12th, she entered into hospice care at the Johnson County Hospital and it was there she left us for her heavenly home on April 17, 2016. Lola was preceded in death by her husband, Leland; her parents, D.J. and Frieda Caspers; her parents-in-law, Ernest & Esther Heidemann; her siblings, Irene Beethe, Opal Jurgensmeier, Darlene Hafermann, LaVerne Caspers, and Marceille Habegger; and her brothers and sisters-in-law, Elmer Beethe, Albert Jurgensmeier, Bill Hafermann, Ellenora Caspers, Leona Caspers, Gary Habegger, Rayman Beethe and Eldon Badertscher; her niece, LuAnn Caspers and her nephews, Roger Badertscher, Robert Heideman and Ricky Heideman. A celebration of life will be Saturday, April 23, 2:00 p.m. at St. Peter’s Lutheran Church near Elk Creek. Burial of ashes will be at a later date in St. Peter’s Lutheran Church Cemetery. No visitation is planned. Memorials are suggested to family choice.

Lola L. (Caspers) Heidemann was born the fifth child of D.J. and Frieda (Antholz) Caspers&#8217; eight children at the farm home near Auburn, Nebraska on January 15, 1930. Lola entered her heavenly home and the loving arms of Jesus on April... View Obituary & Service Information

The family of Lola L. Heidemann created this Life Tributes page to make it easy to share your memories.

Send flowers to the Heidemann family.