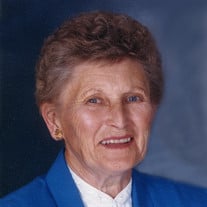 Loretta May Snyder was born May 9, 1930 to William and Ella (Niedermeyer) Snyder near Talmage, Nebraska. She was raised on the family farm, the third of five children. Loretta attended Oak Hill School and graduated in 1947 from Talmage High School. She attended Peru Normal School and then taught for two years at an Otoe County rural school. On July 1, 1950 Loretta married Max Smith in Abbeyville, Missouri. Their wedding was officiated by her uncle, Rev. Paul Niedermeyer. The couple’s first home was in Talmage, and they then moved to Brock, Nebraska. In 1993 Loretta and Max “retired” and moved into Auburn, Nebraska. Loretta came to live at the Good Samaritan Society-Auburn in 2016. Loretta had a lifelong love of horses. She enjoyed gardening and she and Max were very proud of all of their 8 grandchildren. Loretta passed away at Good Sam on Sunday, May 27, 2018 at the age of 88 years and 18 days. Her husband Max, sons Joel and Bill, her parents, and brothers Edgar and Leland Snyder preceded her in death. She is survived by her daughter and son-in-law Barbara and Dave Mecklem of Lyman, NE; daughters-in-law Sylvia Smith of Auburn, Linda Smith of Nebraska City; son and daughter-in-law Dale and Sheri Smith of Palmyra; grandchildren Matthew (Maxcey) Smith, Amanda Smith, Erin (Eric) Sturdivant, Nicole (Brandon) Carlson, Jenna Smith, Libby (Blake) Henning, Meredith Smith, Anna Smith; great-grandchildren Avery and Jackson Smith, Tate and Tylynn Sturdivant, Wesley and Kade Henning; brother Melvin (Betty) Snyder of Talmage; sister Rosella Eaton of Nebraska City; sisters-in-law Nora Snyder of Unadilla, Pat Snyder of Pleasant Dale; special friends Jean and Mark Ward and Kathy Duffy; many nieces, nephews, cousins, other relatives and friends.

Loretta May Snyder was born May 9, 1930 to William and Ella (Niedermeyer) Snyder near Talmage, Nebraska. She was raised on the family farm, the third of five children. Loretta attended Oak Hill School and graduated in 1947 from Talmage... View Obituary & Service Information

The family of Loretta Smith created this Life Tributes page to make it easy to share your memories.